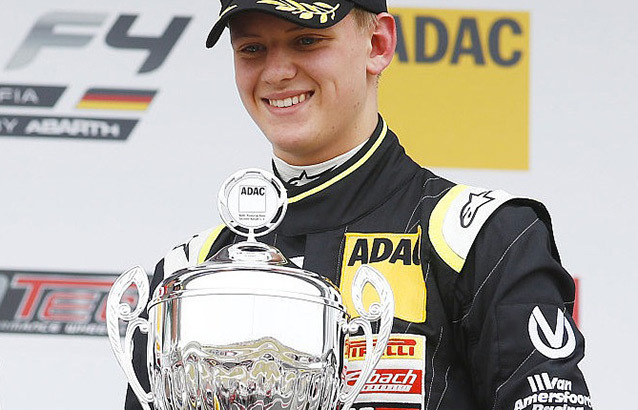 Great start in the ADAC Formula 4 for Mick Schumacher (16, GER, Van Amersfoort Racing). The son of record Formula 1 world champion winner Michael Schumacher won the third race in the etropolis Motorsport Arena Oschersleben in front of more than 20,000 spectators at the weekend. The 16-year-old is the first rookie to achieve a victory in the season opener of the new ADAC High Speed Academy. After success in karting, Schumacher is contesting his first season in formula racing for Van Amersfoort Racing this year.

“All in all, I’m really happy with this start to the season and look forward to the next set of races,” said Schumacher, who had previously placed as best formula racing rookie at this first ADAC Formula 4 race in Oschersleben. Van Amersfoort Racing had two reasons to celebrate, as Schumacher’s team-mate Joey Mawson (19, AUS, Van Amersfoort Racing) crossed the finish line behind him in second place, making this a one-two victory for the well established Dutch team. Austrian driver Thomas Preining (16, AUT, kfzteile24 Mücke Motorsport) completed the party on the podium in third place. This was the first podium finish in the ADAC Formula 4 for the newcomer to formula racing with kfzteile24 Mücke Motorsport. 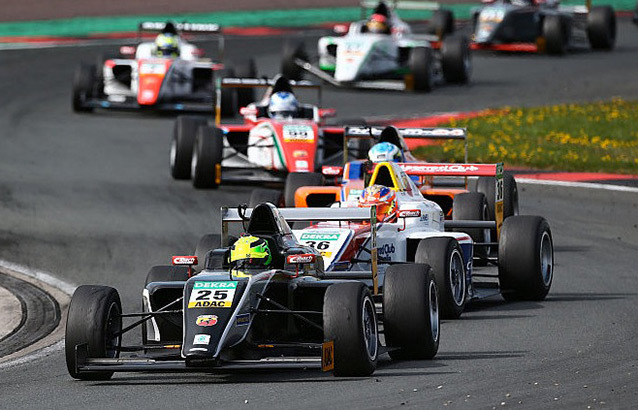 Schumacher laid the foundations for victory right at the start. He won through against pole-setter Preining with a skilful overtaking manoeuvre after starting from second place on the grid and went into the lead. Schumacher kept his nerve on the re-start following a safety car period on the first lap, pulling out a lead of over a second on Tim Zimmermann (18, GER, Neuhauser Racing), who was chasing hard behind him. The ADAC Sports Foundation protégé was beaten in a scrap for second place with Mawson on Lap 8 and later forced to retire with a puncture.

Mawson, who had started from fifth place, began to hunt down Schumacher towards the middle of the race. The Australian gained ground on his Van Amersfoort Racing team-mate with every lap. Mawson took seven tenths of a second out of Schumacher in the lead on the 15th lap. The 19-year-old was close enough for his first attempt at overtaking on the following lap, but Schumacher defended successfully. Mawson did not get another chance, because the race ended behind the safety car when Benjamin Mazatis (17, GER, kfzteile24 Mücke Motorsport) skidded off track.

Ralf Aron (17, EST, Prema Powerteam) in fourth place behind Preining just missed his third podium finish at Oschersleben. The Prema Powerteam youngster put in another convincing performance and improved five places from ninth on the grid. Joel Eriksson (17, SWE, Motopark) finished fifth at what constitutes a home fixture for his team, Motopark.

Dienst travels as championship leader to the second race weekend at the Red Bull Ring in Austria (5th-7th June, 2015). On 58 points, he leads from Aron who has 45 points. Mawson is placed third overall in the standings with 38 points. Schumacher heads the overall standings in the ADAC Formula 4 Rookie Cup with 65 points. He has a lead of 17 points on Cecotto, the son of ex-Formula 1 and DTM driver and former motorcycle world champion Johnny Cecotto.

Mick Schumacher (16, GER, Van Amersfoort Racing), winner:
“I’m ecstatic, of course! My first race weekend could not have gone better! We had a good start, because my tyres were still fresh, and it went well from then on, apart from at the end where things were close again. I was not too unhappy about the safety car. All in all, I’m really pleased with this start to the season and look forward to the next set of races.”

Joey Mawson (19, AUS, Van Amersfoort Racing), second:
“I’m very satisfied. A podium on my first weekend in the ADAC Formula 4 is perfect. I got off to a really good start, and overtaking during the race was great fun. At the end of the race, I was getting closer and closer to my team-mate Mick. But the appearance of the safety car finally put paid to my chances. But I’m very happy with second place and the one-two win for my team. The weekend could not have ended on a better note.”

Thomas Preining (16, AUT, kfzteile24 Mücke Motorsport), third:
“A podium on the first race weekend of the ADAC Formula 4 season is really a perfect start to my formula racing career. I hardly had any opportunity to do any testing over the winter break and have no prior experience of driving on the track at Oschersleben. Consequently, just finishing in the points was our objective. But I’ve now managed this twice, and it doesn’t get any better than capping it all off with a podium. Having said that, though, my start was not optimal. Difficulties with the clutch meant that I immediately lost a few positions. In addition, I had some minor problems with the car on the first few laps. After that, I was able to reclaim third place, but by then the two front-runners were too far away. The safety car gave me hope again briefly, but unfortunately, the race ended behind it and an attack was no longer possible.”

ADAC F4 Orschersleben: Second win of the season for Dienst

Road to Wackersdorf: a international shifter race before the World Championship