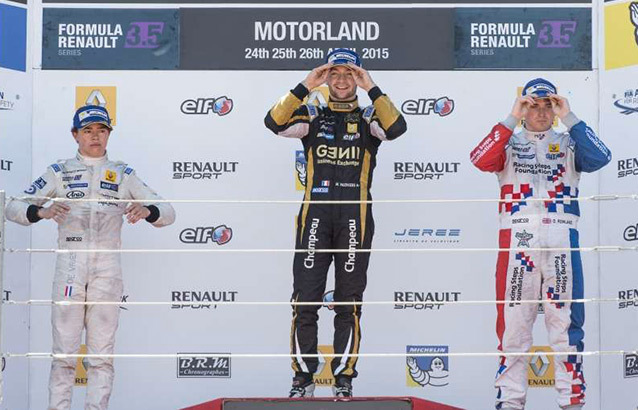 After his maiden victory on the same circuit on 27 April, 2013 in the Eurocup Formula Renault 2.0, Matthieu Vaxiviere (Lotus) scored his first triumph in the Formula Renault 3.5 Series this Sunday 26 April at Motorland Aragón. During a race interrupted by rain, the Lotus F1 Team Junior driver had to wait until the penultimate corner to overtake pole winner, Nyck de Vries (DAMS). Third place Oliver Rowland (Fortec Motorsports) remains the leader in the general classification.

In the morning, Nyck de Vries became the first Formula Renault 3.5 Series rookie to claim the pole in 2015 thanks to his lap of 1:41.609. The Dutchman lined up on the grid ahead of Matthieu Vaxiviere and the Fortec Motorsports entries of Oliver Rowland and Jazeman Jaafar.

Nyck de Vries holds on to the lead

In the rain, the race started behind the safety car. On lap five, the weather conditions worsened and the race stewards decided to show the red flag just until the storms ended. The competitors re-started behind the safety car that came in after two laps. Nyck de Vries held on to his advantage and created a gap from Matthieu Vaxiviere. Behind, Oliver Rowland defended his position against Jazeman Jaafar, while he battled with Tom Dillmann (Jagonya Ayam with Carlin) and Dean Stoneman (DAMS). 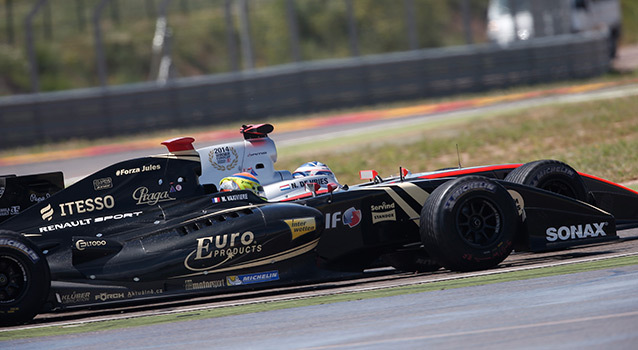 After the mandatory tyre changes, Nyck de Vries led after his pit stop on lap 13. Entering the pits at the same time, Matthieu Vaxiviere caught up to the leader and made an unstoppable attack at the end of the straight on the final lap of the race.

A deposed pole winner the day before, the French driver won against the top rookie on the day, Nyck de Vries. Oliver Rowland completed the podium, followed by Tio Ellinas (Strakka Racing), who made a fantastic pit stop. Tom Dillmann was fifth ahead of Meindert van Buuren, who overtook Dean Stoneman and Jazeman Jaafar on the final two laps. Alfonso Celis (AVF) and the F1 driver Roberto Merhi (Pons Racing) also scored points as did Bruno Bonifacio (International Draco Racing), following the 25-second penalty handed to Dean Stoneman for speeding in the pits.

Matthieu Vaxiviere : “I missed my chance of winning yesterday, but I was able to score a lot of points. Today, we had to wait until the conditions improved, but the race stewards made the right decision. I remain focused and pressured Nyck. The team did an excellent pit stop, allowing me to get closer. I managed my rain tyres in such a way as to keep them cool on a drying track surface and I saw an opportunity. I had a go on the following lap and I am very happy to take this victory ! I hope it continues like this at Spa and Monaco.“

Nyck de Vries : “Qualifying went very well and I was satisfied with what we have done. The pace was good and I managed to create a nice gap, but my tyres suffered. Following the pit stop, I held off Matthieu Vaxiviere, but he found an opening. Fair play to him. “

Oliver Rowland : “The target is always to win, but this track isn’t the one we do our best on. I missed my last lap in qualifying this morning, while still limiting the damage. I had a small off-track excursion behind the safety car, because the visibility was poor. I am rather satisfied with this podium result, as well as leading general classification.“