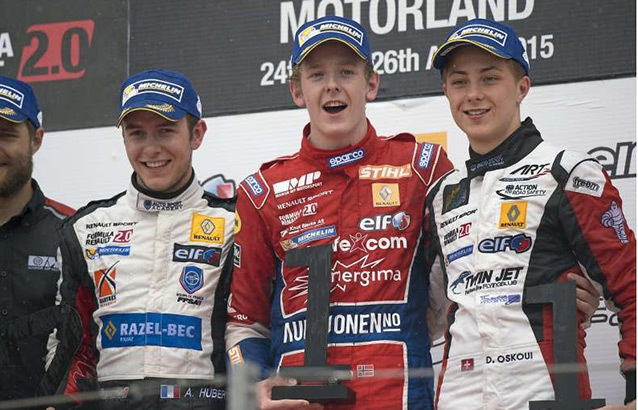 Dennis Olsen (Manor MP Motorsport) won race three of the weekend in the Eurocup Formula Renault 2.0 at Motorland Aragón. The pole winner and runner-up in the category last year resisted the pressure from Jack Aitken (Koiranen GP) and a chaotic safety car period to take his maiden victory of the season ahead of Anthoine Hubert (Tech 1 Racing) and Darius Oskoui (ART Junior Team). Sixth on Sunday, Louis Delétraz (Josef Kaufmann Racing) maintains his lead in the general classification.

Olsen and Aitken pull away

While Dennis Olsen held on to the lead, Ben Barnicoat struggled to get off the line. Jack Aitken took advantage to move into second place and quickly distanced himself from Ignazio D’Agosto and Lasse Sørensen. In trying to regain his position, Ben Barnicoat made contact with Lasse Sørensen, eliminating both in the process. Ukyo Sasahara (ART Junior Team) moved up to fourth place ahead of Anthoine Hubert, who was overtaken by Martin Kodric (Fortec Motorsport) on lap two.

The safety car changed everything 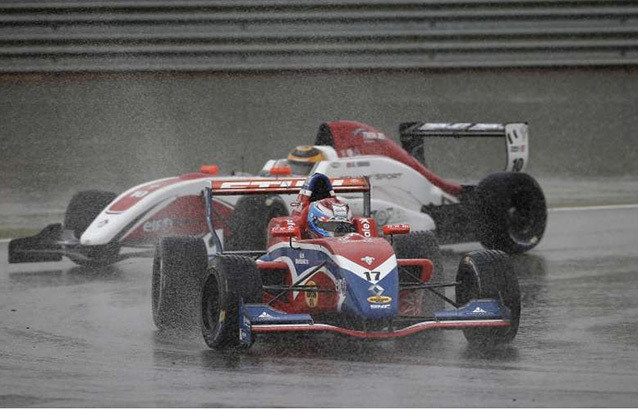 Dennis Olsen : “At the start, I was more focused on the clutch than the lights because I wanted to avoid wheelspin. Jack was very fast in the second sector and I had to do defend a little bit. Afterward, the safety car came out and things turned to my advantage. I am happy with this victory after having lost out on the pole for just a few thousands of a second yesterday and I look forward to Spa, a track I love !“

Anthoine Hubert : “Third yesterday, second today, the next step can only be the win ! It was a crazy race and I moved up from ninth to second place. I made a mess of my qualifying lap due to the rain and it was good that my luck turned ! I am third overall. It was a good weekend and we are now concentrating on Spa !“

Darius Oskoui : “After the difficulties of the first half of the meeting, in the dry, today we discovered that we are competitive in the wet. It is a good start to the season, although we did benefit from the accidents ahead of us. After two years away from competition, the title will be a difficult task, but we count on improving throughout the year.“

Note : following a 25-second penalty for overtaking Ukyo Sasahara behind the safety car, Lasse Sørensen lost the one point for tenth place in race 2. Matthew Graham inherited the final point, while Harrison Scott (AVF) won the trophy for the highest place rookie.

See the Race 3 results below.