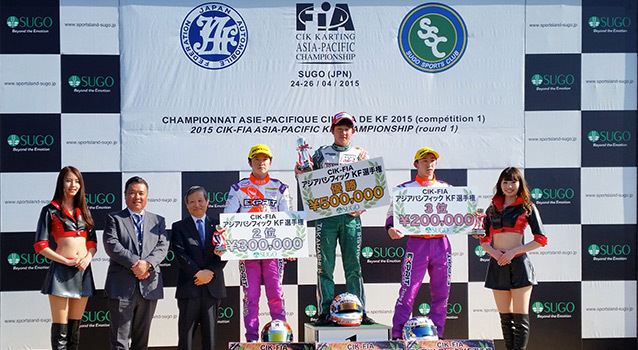 After a very open Competition, Haruyuki Takahashi (Tony Kart-Vortex-B’stone) has become the undisputed winner in the Prefinal as well as in the Final for the opening Competition of the CIK-FIA Asia-Pacific Championship for KF. A good sporting atmosphere and pleasant attitudes have been the ingredients for the success of this Competition, organised at the Japanese track Sugo which was bathed by warm weather. The title will be decided later in the season at Macau and it remains accessible for many of the Drivers classified.

The Japanese Competition can be proud of a real success overall at the very good Sportsland Sugo venue. The go-kart track, well known to local Drivers who often race there in their national competitions, has hosted the great figures of the discipline such as Ayrton Senna in the past. The 984m track, winding but fast, is highly valued by the Drivers. The warm welcome from the Japanese completed the success of this competition, which brought together 22 of the top talents in the country as well as four support categories. The technical uniqueness of this Championship, with three tyre suppliers – Dunlop, Bridgestone and Yokohama – added to the Competition.

After two full days dedicated to Free Practice, the two Qualifying sessions rewarded the performance from Ritomo Miyata (Exprit-TM Racing-Dunlop), the pole-sitter with a lap of 38”504 which would remain the record until the end of the Competition. Tougo Suganami (CRG-TM Racing-B’stone) was conspicuous in 2nd place from Turbo Asahi (Exprit-TM Racing-Dunlop). In the first of the two Qualifying Heats, there was drama with the retirement of the young hopeful Kakunoshin Ota (Super Winforce-Parilla-B’stone) following a mechanical failure, who had distinguished himself by taking the 2nd place in the CIK-FIA Karting Academy Trophy in 2014. Ota failed to overcome this disadvantage and also retired in the Final. Meanwhile, Haruyuki Takahashi, fourth in Qualifying, had to face Miyata. Both drivers were tied with a win and a second place each.

Takahashi then took the ascendancy over his main rival in both the Prefinal and the Final to finish as winner of the Competition. Miyata conceded 2nd place in the Prefinal to Asahi, but the positions were reversed in the Final when both drivers were putting pressure on the leader. The sharp rise in the Prefinal for Takuma Nishimura (FA Kart-Racing-B’stone TM) was confirmed with fourth position in the Final. Ranked third at the end of the Heats, Toshiki Watanabe (Croc Promotions-TM Racing-Dunlop) finished fifth.

In the provisional classification of the CIK-FIA Asia Pacific Championship for KF, Takahashi is in the first position with 34 points ahead of Miyata and his 30 points. Asahi is 3rd (23 points)