ADAC F4 Orschersleben: Second win of the season for Dienst 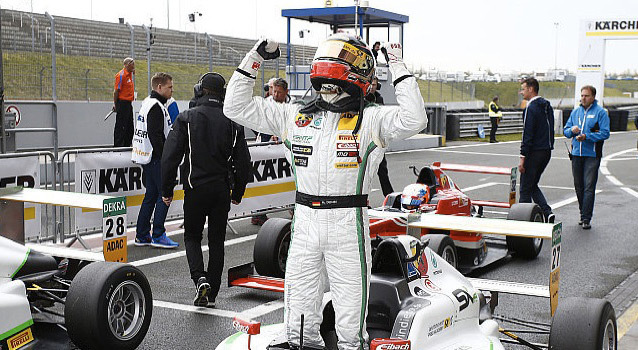 Marvin Dienst (18, GER, HTP Juniorteam) made the best possible start to the first season of the ADAC Formula 4. After winning the inaugural race on Saturday, the 18-year-old also won the second round in the etropolis Motorsport Arena Oschersleben. Starting from pole position, the HTP Juniorteam driver made a perfect start to the season and leads the overall standings after two of three races at Oschersleben. “Oschersleben has not necessarily been one of my best tracks in the past, so I’m even happier now to have made such a perfect start to the season.” said Dienst.

place. It was his second podium after taking P2 in the inaugural race of the ADAC Formula 4 on Saturday.

All 35 drivers made a clean start to the second race of the season. Dienst kept things under control on the re-start after the first of two safety car periods, asserting his position in the lead unchallenged. Prema Powerteam youngster Ralf laid the foundation for his second podium finish on the same lap, winning through against Joey Mawson (19, AUS, Van Amersfoort Racing) to take third place.

Ralf had to defend against Mawson, as the two HTP Juniorteam drivers drew away in the lead. The Australian was again in no position to mount a decisive overtaking manoeuvre after a second safety car period on the final stint and had to settle for fourth place. Things were much closer between race winner Dienst and Esmeijer. After 18 laps, Dienst was just 0.798 seconds up on his rival, who posted the fastest lap.

See the result of race 2 below.