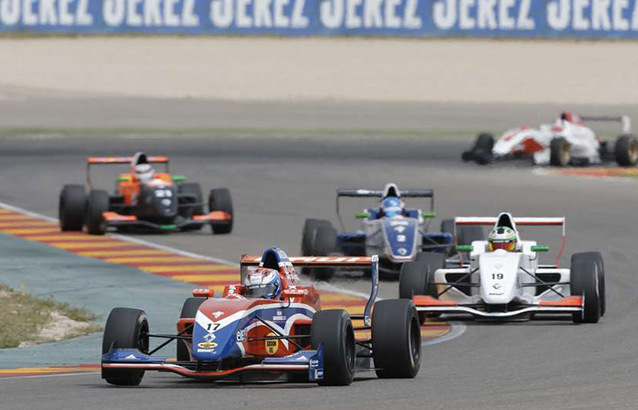 Second in the Eurocup Formula Renault 2.0 standings in 2014, Dennis Olsen (Manor MP Motorsport) took pole position for race three of the weekend at Motorland Aragon. At the end of a session in which passing showers tested the drivers, the Norwegian topped the grid from Ben Barnicoat (Fortec Motorsports) and Jack Aitken (Koiranen GP), with his Manor MP Motorsport team-mates Lasse Sørensen and Ignazio rounding off the top five. Saturday’s double race winner Louis Delétraz (Josef Kaufmann Racing) will start on row eight.

Dennis Olsen made the early pace in Group B. Despite the best efforts of the Koiranen GP drivers, Antoine Hubert (Tech 1 Racing), Matthew Graham (AVF), Louis Delétraz and Ignazio D’Agosto, the Norwegian stayed out front until the rain intensified, his fastest lap of 1.58.968 allowing him to end the session out front from Jack Aitken and Ignazio D’Agosto.

The Group A drivers had no option but to bolt the wets on for the start of their session. Callan O’Keeffe (Fortec Motorsports) went fastest early on, only for Darius Oskoui (ART Junior Team) and then Matevos Isaakyan (JD Motorsport) to outpace him. In the closing stages Ben Barnicoat and Lasse Sørensen were rewarded for their decision to switch to slicks, with the Briton pipping the Dane with a time of 2:07.220 .

Dennis Olsen : “The key was having the confidence to push on a damp track because a red flag could have appeared at any time. I was pushing so hard that I even had a spin on my outlap. It was a good session and I had a little bit of luck when the rain returned. It’s a good opportunity for me to make up some of the ground I lost yesterday and I’m hoping the track will be dry for the race. We’ve got a good chance to win it and to show much progress we’ve made with the team.“