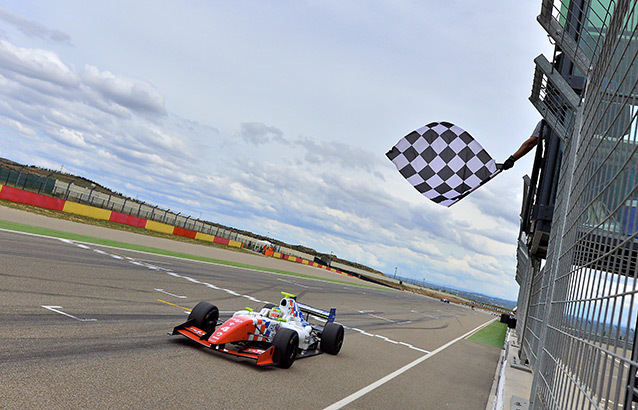 At Motorland Aragón, Oliver Rowland (Fortec Motorsports) became the first driver to win this season in the Formula Renault 3.5 Series. Taking advantage of a penalty handed to Meindert van Buuren (Lotus), the Englishman won the race despite not leading a single lap, while Jazeman Jaafar made it a one-two finish for Fortec Motorsports. Holding off pole winner Matthieu Vaxiviere (Lotus), the Red Bull Junior Team driver, Dean Stoneman (DAMS) completed the podium, will also being the highest place rookie.

After dominating the collective tests, Matthieu Vaxiviere went on to claim his first-ever pole position in the Formula Renault 3.5 Series. The time of 1:41.446 put in by the Lotus FC1 Junior Team driver. Second quickest qualifier, Gustav Malja (Strakka Racing), was excluded after failing a post-qualifying technical inspection. Oliver Rowland was promoted to the front row.

While Beitske Visser (AVF) encountered a problem during the formation lap, Matthieu Vaxiviere was slow off the start line. His team mate Meindert van Buuren made the most of it to take the lead ahead of Oliver Rowland, Jazeman Jaafar and Dean Stoneman. Back in the field, Sean Gelael (Jagonya Ayam with Carlin) and Roy Nissany (Tech 1 Racing) made contact while Aurélien Panis (Tech 1 Racing) and Egor Orudzhev (Arden Motorsport) had to pass through the pits at the end of a lap that also eliminated Tio Ellinas (Strakka Racing).

Solidly in the lead, Meindert van Buuren received a 20-second penalty for jumping the start. Behind the Dutchman, Oliver Rowland and Jazeman Jaafar ran alone out front while Dean Stoneman was under pressure from Matthieu Vaxiviere.

Oliver Rowland: “I wasn’t expecting to win. The low downforce configuration brought so many differences and if someone told me yesterday, I wouldn’t have believed them! At the start, the Lotuses didn’t leave me any room and I did everything I could to avoid contact. I soon wondered if Meindert hadn’t maybe jumped the start because mine was good. I tried to maintain the gap between myself and Jazeman and I am very happy with this victory!“

Jazeman Jaafar: “I am very happy with this one-two finish. The team worked very hard during the winter to get this result. The low downforce configuration brought a huge challenge. I would have obviously liked to be a bit faster in qualifying and in the race but I am thrilled with this result.“

Dean Stoneman: “It is great to be on the podium. Throughout the race, I never knew the leader took a penalty, so it was a fine surprise to hear the team tell me I was on the podium. Our preparation for the season had its highs and lows, with the crash at Jerez for example, but the work has paid off.“