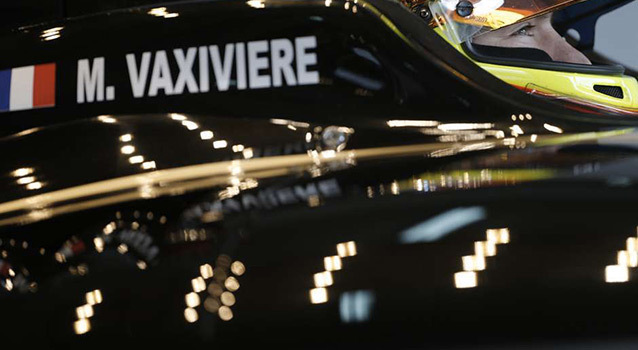 The opening qualifying session of the 2015 Formula Renault 3.5 Series season went the way of Matthieu Vaxiviere (Lotus). With a low-downforce aerodynamic configuration on the rear wing compulsory for Saturday’s race, the Lotus F1 Team Junior driver outpaced the field with a lap of 1:41.446 and will head the grid from Oliver Rowland (Fortec Motorsports) and Meindert van Buuren (Lotus). Second in qualifying, Gustav Malja (Strakka Racing) was later disqualified following technical checks.

The first part of the session saw no fewer than seven drivers swap the lead. Jazeman Jaafar then took control, setting the pace from the French duo of Matthieu Vaxiviere and Tom Dillmann.

The drivers bolted on new tyres for the final ten minutes, with Oliver Rowland the first to better the Malaysian’s time. In a hectic closing three minutes, Matthieu Vaxiviere snatched pole with a time of 1:41.446, while rookie Gustav Malja took second place on the grid, prior to his exclusion, and Oliver Rowland third, with Meindert van Buuren and Jazeman Jaafar (Fortec Motorsports) completing the top five.

Matthieu Vaxiviere : “There’s no better place to be than in first so it’s a great start to the year. It was a lot tighter than in free practice and things were a little tougher. I thrive on pressure, though, and I managed to come away with pole. I now have to kick on and try and win the race. That’s the objective, and with the low downforce, DRS will be marginal.”