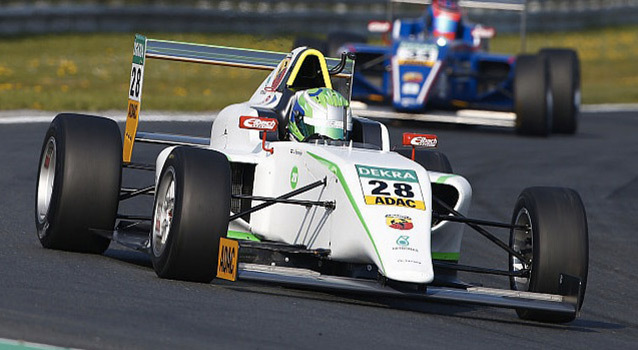 A best time that will go down in the annals of the sport – Holland´s Janneau Esmeijer (18, NED, HTP Junior Team) has become the first pole-setter in the new ADAC Formula 4. The HTP Junior Team youngster set the fastest time in qualifying for the first race at the etropolis Motorsport Arena Oschersleben. Due to the high number of starters – no fewer than 38 – qualifying was contested in two groups. Esmeijer in Group B took 1:26.440 minutes for his fastest lap. The 18-year-old out-qualified Australia´s Joey Mawson (19, AUS, Van Amersfoort Racing) who was setting his personal best of 1:26.705 minutes in Group A. The two will now start alongside each other on the front row.

Michael Waldherr (18, GER, Motopark) takes the third starting position in what counts as the home race for his Motopark team. The 18-year-old was second fastest in qualifying group B on a lap time of 1:26.867 minutes. Sharing the second row will be team-mate Marvin Dienst (18, GER, HTP Junior Team) whose personal best time of 1:26.714 minutes put him second in Group A. Thus, both drivers in the HTP Junior Team squad have made it into the Top Four.

Estonia´s Aron Ralf (17, EST, Prema Powerteam) and Italy´s Mattia Drudi (16, ITA, SMG Swiss Motorsport Group) have booked the third row for the first of three races this weekend. Joel Eriksson (17, SWE, Motopark) and Zhou Guan Yu (15, ITA, Prema Powerteam) occupy the seventh and eighth slots. The Prema Powerteam youngster, who benefits from membership of the Ferrari Driver Academy, is the best-placed rookie out of all 38 entrants.

Mick Schumacher (16, GER, Van Amersfoort Racing), son of record world championship winner Michael Schumacher, emerged from his first qualifying session in Formula racing as tenth fastest in Group B and now starts from P19. The first race on Saturday will be contested at 12 midday.

Fans will have the opportunity to watch this inaugural race in the new ADAC Formula 4 series live on television. Exclusive TV partner SPORT1 will begin its coverage of Race 1 at Oschersleben on Saturday 25th April at 11.45am.

Deciding the starting positions for the second race are the second-best lap times in qualifying. Marvin Dienst came out on top in this regard and therefore starts the second round of the competition on Sunday morning (coverage from 9.30am live on SPORT1+) from pole position. His team-mate Jeanneau Esmeijer will occupy the second position on the grid. Joey Mawson and Ralf Aron share the second row.