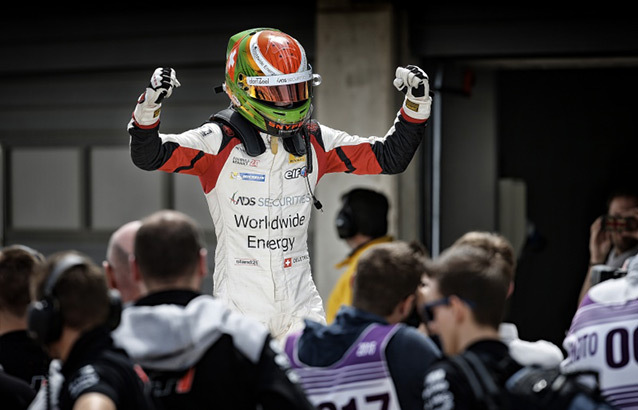 Two pole positions, two victories and a fastest race lap sum up the Saturday of Louis Delétraz (Josef Kaufmann Racing) at Motorland Aragón. The BMW Motorsport Junior driver won race one ahead of the member of the McLaren Young Driver Development Programme Ben Barnicoat (Fortec Motorsports) and member of the French FFSA Circuit Team Anthoine Hubert (Tech 1 Racing). The son of the former F1 driver then did it again in race two ahead of team mate Kevin Jörg, making it a Josef Kaufmann Racing one-two finish and Dennis Olsen (Manor MP Motorsport). The Swiss driver leads the way in the general classification.

Saturday morning, Louis Delétraz became the first pole winner of the Eurocup Formula Renault 2.0 season in taking both top spots with lap times of 1:55.776 and 1:55.868.

When the lights went out, Louis Delétraz held on to the lead against Ben Barnicoat, Dennis Olsen, Kevin Jörg and Anthoine Hubert. Making the most of the battle amongst his pursuers, the Swiss driver pulled away while the Norwegian dropped to sixth place. Kevin Jörg also lost two positions against Anthoine Hubert and Matevos Isaakyan (JD Motorsport).

With a perfect getaway, Louis Delétraz maintained his advantage from Kevin Jörg, who was in a fight with Dennis Olsen and Matevos Isaakyan, while fifth place Anthoine Hubert was surprised by Ben Barnicoat. In the heart of a very animated field, Simon Gachet’s accident brought out the safety car on lap two.

Not troubled at the re-start, Louis Delétraz managed the gap to his team mate and took his second triumph of the day. Dennis Olsen completed the podium ahead of Matevos Isaakyan, Ben Barnicoat, Anthoine Hubert and Jake Hughes. Jack Aitken, Ignazio D’Agosto and Lasse Sørensen (Manor MP Motorsport), top rookie, all finished in the points.

Louis Delétraz : “It’s a good start to the season. I took my third and fourth consecutive pole positions, then two victories. The starts are always difficult, but today they were good. With Kevin behind me on the re-start in race two, there was a little pressure but I managed to conserve my speed to create a gap. This is my first season in the Eurocup, but my third in Formula Renault 2.0. I have to be fast and I know I have the speed and I must continue on !“

Ben Barnicoat : “I had a pretty eventful race ! I had a hard time getting going again before being under pressure from Dennis Olsen. Then, Jörg made the most of my draft, while Louis was too far ahead for me to take advantage of his draft. We struggled here during winter testing, so this is a good start to the season !“

Dennis Olsen : “The battle with Louis in qualifying was very tight and it was a shame not to be on the podium in race 1. Unfortunately, I couldn’t find an opening despite getting good starts. What is essential is that we have the potential to get the pole tomorrow and I hope the result will follow !“