Camponeschi and Ardigo tied after the KZ2 heats 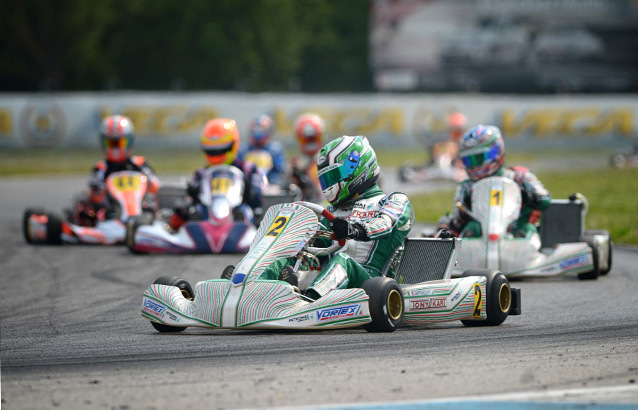 Camponeschi won despite the impressive return and fastest lap from Ardigo. Abbasse finished 3rd with the second fastest lap of the race. De Conto was able to hold on to 4th place, followed by Simo Puhakka (CRG / Maxter). Running 2nd early in the race, Lundberg took 6th ahead of Thonon. Jorge Pescador (Praga / Parilla) fought with great panache, but finished 10th behind Corberi (13 places gained) and ahead of Kozlinski (9 places gained), Dreezen 12th (11 places gained). Hajek went off at T1 shortly after the start.

Then Ardigo won with the best lap of the third hear while the battle lasted until the end for 2nd place. Camponeschi failed to keep pace with Abbasse and even yielded to De Conto and Puhakka in the final laps. Kozlinski ended up his wheeltracks in 6th position ahead of the always fast Corberi.

Behind the official Tony Kart duo of Camponeschi and Ardigo, Abbasse took 3rd place ahead of De Conto, Puhakka and Lundberg.