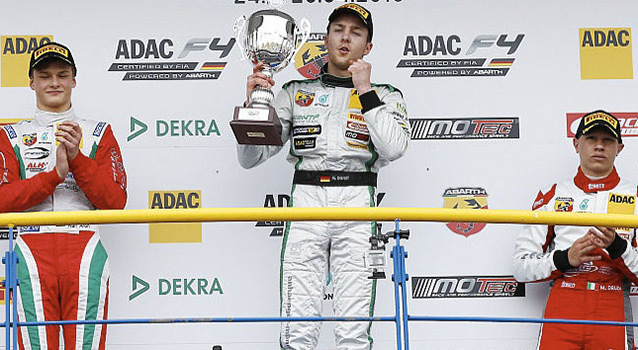 A historic success in the etropolis Motorsport Arena Oschersleben: Marvin Dienst (18, GER, HTP Junior Team) is the first race winner of the new ADAC Formula 4. The HTP Junior Team driver won the first of three races taking place at the season opener of the ADAC High Speed Academy. Aron Ralf (17, EST, Prema Powerteam) and Mattia Drudi (16, ITA, SMG Swiss Motorsport Group) completed the party on the podium. “It’s incredible. I haven’t yet taken in the full significance of this win,” said Dienst after his victory at Oschersleben.

Mick Schumacher (16, GER, Van Amersfoort Racing) placed ninth in his first formula racing fixture. The son of record Formula 1 world champion Michael Schumacher was the best-placed rookie in the 35 car strong field. Schumacher also posted the fastest lap of the eleven rookies. The newcomer to single seater racing at Van Amersfoort Racing now leads the ADAC Formula 4 Rookie Cup which will be awarded to the most successful newcomer to formula racing at the end of the season.

Schumacher pleased with his charge

“Of course, I’m pleased that I caught up – it didn’t occur to me at first that I was best rookie! After yesterday’s qualifying and my grid position, I’m really satisfied,” said Mick Schumacher, who went on a charge from 19th on the grid and improved by a total of ten positions. Schumacher will start the third race on Sunday (15:20, live on SPORT1) from second place behind Thomas Preining (16, AUT, kfzteile24 Mücke Motorsport).

Race winner Dienst laid the foundations for his success shortly after the start. From fourth position on the grid, the 18-year-old took the lead from pole-setter Janneau Esmeijer (18, NED, HTP Junior Team) in the second turn. Dienst kept an eye on what was happening around him during three safety car periods in all to eventually cross the finish line just one second up on Prema Powerteam youngster Ralf. The Estonian took advantage of the exciting start to move up from fifth to second place. Ralf then began to hunt down Dienst but was not a threat to the eventual winner.

Third-placed Drudi also put in an impressive performance. The Italian started the race from sixth position on the grid and quickly moved up two places. At the restart after the second safety car phase on the seventh lap, Drudi pulled off a spectacular overtaking manoeuvre to win through against Michael Waldherr (18, GER, Motopark) and take third place. Waldherr finally crossed the finish line in fifth place right behind team-mate Joel Eriksson (17, Sweden, Motopark) in what constitutes a home fixture for team Motopark.

Joey Mawson (19, AUS, Van Amersfoort Racing), who placed sixth, had an eventful race. The Australian, racing for Van Amersfoort Racing, dropped down the field initially from second place on the grid to the rear of the midfield. The 19-year-old went on a superb charge over the 18 laps, clawing his way back to the front. Mawson battled for position towards the end with fellow team-mate Harrison Newey (16, GBR, Van Amersfoort Racing), the son of famous Formula 1 designer Adrian Newey, and finally got the upper hand. ADAC Sports Foundation protégé Tim Zimmermann (18, GER, Neuhauser Racing), Schumacher and Preining completed the Top-Ten.