The young Canadian driver started the French F4 Championship, racing with the leaders in each of the races. He managed to collect valuable points in the championship throughout the Gard weekend. 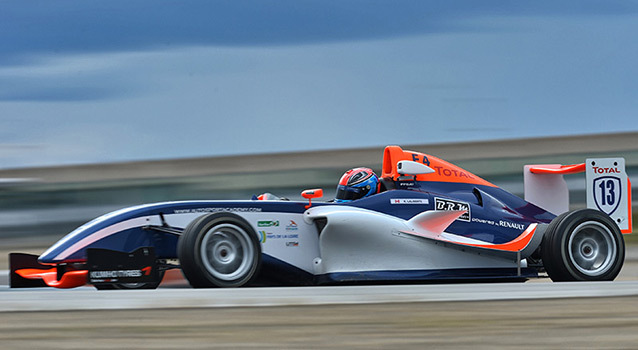 In the qualifying session Kami Laliberté proved very much at ease on the Ledenon circuit and brilliantly ran in 2nd and 3rd in Races 1 and 3, despite very difficult track conditions.
In Race 1, Kami made a beautiful start and easily retained 2nd place but he nevertheless had to contain opponents who maintained constant pressure. In mid-race, Kami battled valiantly to keep his 2nd place but had to shift down to 5th position at the end of a pass from muscular arms. Refusing to be impressed by his opponents, some of whom are on their second year in the series, Kami was able to go back to 4th place prior to finishing in 6th place to garner his first points as well.
With the reverse grid principle for Race 2, Kami was positioned in 5th place for the start. At the lights, Kami maintained its position but an incident in the pack lost a few places for the young Canadian. Little affected by this episode, Kami resumed his forward march and with similar times to the leaders, he managed to reach the finish line in 5th position.
In Sunday’s last race the weather conditions were dire, and visibility was almost zero on a dark and wet track. Kami revelled in overtaking after a slightly missed start. While he could have easily taken one of the podium positions, his momentum was stopped by a red flag stopping the race; and Kami had to settle for 4th place.

The next meeting will be at the Le Mans Bugatti circuit for the second round of the Championship on 1st, 2nd and 3rd May

Kami Laliberté: “This first race weekend was rich in experience and I’m happy to have raced in the lead pack throughout the weekend. Of course, I’m a little disappointed not to be on the podium in Race 3, but I’ll keep up the level of performance I know I displayed.
One of my goals was to score points in each race. This is done, but now I’m concentrating on the next race at Le Mans where I have to work to be even more competitive.”

Would you like to drive in Brazil next year?