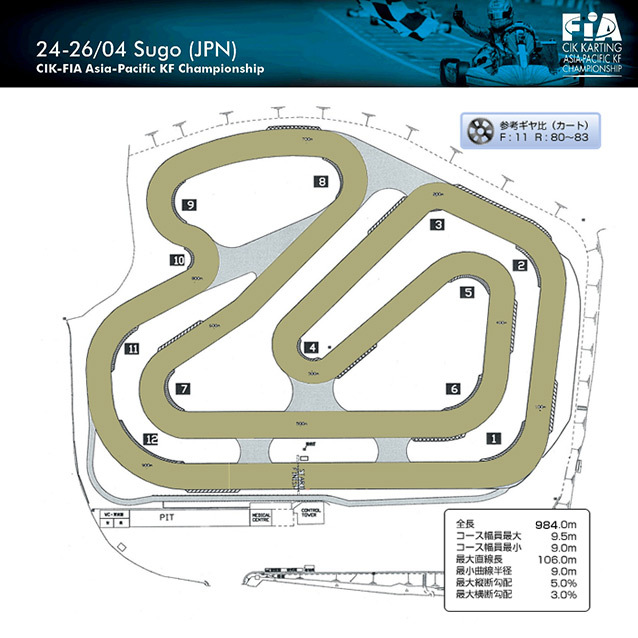 Under the leadership of the ASN, the Japanese Automobile Federation, and its Sport Department, the 2015 CIK-FIA Asia-Pacific KF Championship will start at Sportsland Sugo, a large multi-activities venue dedicated to complex mechanical sports, which is located in the prefecture of Miyagi, in the north of the country. The 984 m Karting track is well known and appreciated by the Japanese Drivers who regularly compete there in national Championship Competitions.

The 2015 CIK-FIA Asia Pacific KF Championship is scheduled to conclude in the Autumn at the second Competition in Macau. The last CIK-FIA Asia-Pacific KF Championship in 2013 was won by the Singapore Driver Julien Fong Wei at Suzuka (JPN). The 2015 Competition will include 22 Drivers, all Japanese, on 10 chassis brands and three engine brands. In a situation specific to this Competition, the tyres will be supplied by three different manufacturers who will be in direct competition: Dunlop, Bridgestone and Yokohama.

The entry list is divided between Karting hopefuls and more experienced drivers with a significant age gap, but one thing is certain: the standard will be high at Sugo and the races are likely to be hotly contested.

Among the younger Drivers Kakunoshin Ota (Super Winforce-Parilla-B’stone) represented Japan at the CIK-FIA 2014 Karting Academy Trophy with some success as he won the Final at Genk and finished second overall. Conversely, Takeharu Nakamori (Kosmic-TM Racing-B’stone) is one of the most experienced in the field with his participation in the CIK-FIA Asia-Pacific Championship in 2004 in the ICA category. Nakamori also raced at Suzuka during the CIK-FIA World KF1 Championships in 2011 and 2012 and finished 6th in the 2013 CIK-FIA Asia-Pacific KF Championship.

The best international result of the field was obtained by Shouta Kiyohara (CRG-TM Racing-Yokohama) in 2010 who reached the second step of the podium of the CIK-FIA World Cup for Super KF and KF1. Since then he has moved to single-seaters, and is currently one of the very good Japanese F3 Drivers. These good results also include Jinya Yamakawa (Tony Kart-TM Racing-Dunlop), 4th in the 2013 CIK-FIA Asia Pacific KF Championship. Like him, other Japanese drivers have had the opportunity to compete in major European competitions. Hiroaki Watatani (Wildkart-Vortex-B’stone), for example, participated in the four continental Competitions of the 2011 CIK-FIA KF1 World Championship. Many other drivers entered at Sugo have had the opportunity to shine at the national level.