Camponeschi and Fasberg on the top step at Sarno

The first Competition of the CIK-FIA European KZ and KZ2 Championship, which has just ended at Sarno (ITA), enabled racing to the finish in a good sporting atmosphere which allowed the majority of Drivers to express their talent under very satisfactory conditions. Camponeschi in KZ and Fasberg in KZ2 took the lead of their Finals and settled at the top of the provisional classification of their respective Championships.

86 Drivers from 19 countries competed in both categories on the beautiful 1699 m circuit of Sarno, at the foot of Vesuvius. Sunny spring weather accompanied the Competition, which was as good as promised because of the sporting behaviour and effective monitoring by the CIK-FIA officials. The battle continued into the finals which crowned the consistent outsiders at the expense of the leading Drivers in the previous phases. 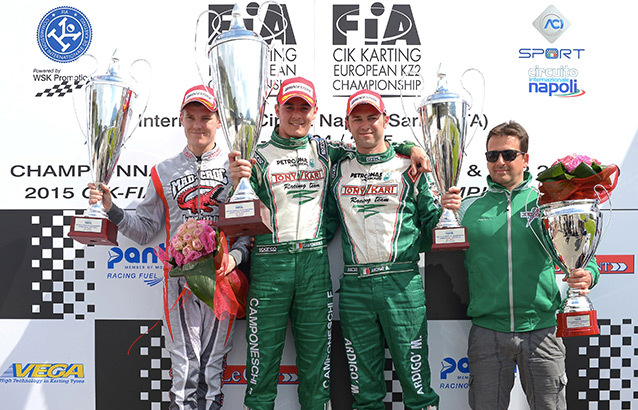 The reigning World Champion Marco Ardigo (Tony Kart-Vortex-B’stone) monopolised the lead from Qualifying Practice onwards, imposing in the Qualifying Heats as well as in the Prefinal in KZ. But his opponents didn’t give up and the victory finally went to another Italian, Flavio Camponeschi (Tony Kart-Vortex-B’stone), who is Ardigo’s teammate at the Tony Kart Racing Team and a former World Champion in KF1 in 2012. Another threat came from a brand new team, Mad Croc, who have put their trust in an experienced Driver, Ben Hanley (Croc Promotions-TM Racing-B’stone) who managed to take 2nd place with the fastest time of the Final, while Ardigo was on the third step of the podium. The Czech Driver Patrik Hajek (Praga-Parilla-B’stone) moved up to 4th position ahead of the Frenchman Jeremy Iglesias (Alpha-TM Racing-B’stone), very consistent at the front. The Belgian Rick Dreezen (Ricciardo Kart-Parilla-B’stone), the outgoing European Champion, was forced to retire with an engine failure early in the race. Camponeschi, Hanley and Ardigo took the first three places in the provisional classification of the 2015 CIK-FIA European KZ Championship. 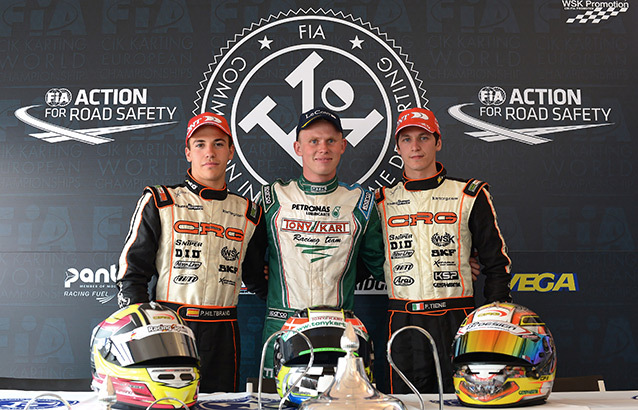 The fight proved at least as intense in KZ2, a category very close technically to KZ, except this year with regard to the tyres supplied by LeCont, but more accessible to private teams and less experienced drivers. The German Maik Siebecke (CRG-Modena Engines-LeCont) opened the scoring by taking pole position in Qualifying Practice, but Luca Corberi (Tony Kart-Vortex-LeCont) took the lead after many Heats where he had the achievement of taking five wins in five races. His domination ended in the Prefinal with a penalty of 5” because of a jumped start, allowing the Italian Alberto Cavalieri (Righetti Ridolfi-Modena Engines-LeCont) to impose himself when he put four new tyres on early. This advantage turned into a disadvantage when facing a majority of Drivers in the Final with their new tyres on. The Dane Andreas Fasberg (Tony Kart-Vortex-LeCont) seized the opportunity to take the mid-race lead while some incidents changed the situation in the early laps. The young Spaniard Pedro Hiltbrand (CRGSPA-Maxter-LeCont) was a sensation, moving up from 13th to 2nd place ahead of his teammate, the Italian Felice Tiene (CRGSPA-Maxter-LeCont), fast on his home track, but slowed by an overheating engine. Fasberg leads the standings in the 2015 CIK-FIA European KZ2 Championship against Hiltbrand, while the Italian Fabian Federer (CRGSPA-Maxter-LeCont) is rewarded for his consistency with the 3rd position.