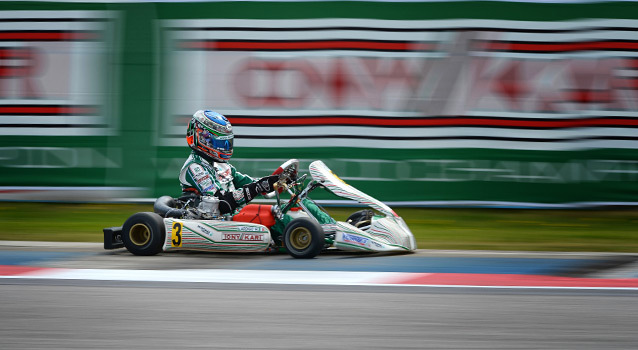 Marco Ardigo (Tony Kart / Vortex) led the KZ Prefinal from start to finish while Ben Hanley (Croc Promotion / TM) and Flavio Camponeschi (Tony Kart / Vortex) battled for 2nd place. The fastest on the track, the Italian attacked the British driver on the penultimate lap and finished 2nd. There was a beautiful drive from Jeremy Iglesias (Alpha / TM) in 4th position ahead of Rick Dreezen (Ricciardo / Parilla) and Anthony Abbasse (Sodi / TM). Arnaud Kozlinski (Sodi / TM) was on track in 3rd position, but then had to make concessions finishing in spite of all his efforts in front of Patrik Hajek (Praga / Parilla) in 7th and Douglas Lundberg (Kosmic / Vortex) 8th. Mirko Torsellini (Ricciardo / TM) gained six places for 10th at the finish and Jonathan Thonon (Praga / Parilla) was 17th. Andrea Dale (CRG / Maxter) and Bas Lammers (Formula K / Parilla) dropped out on the second lap.