Cavalieri the surprise winner of the KZ2 Prefinal 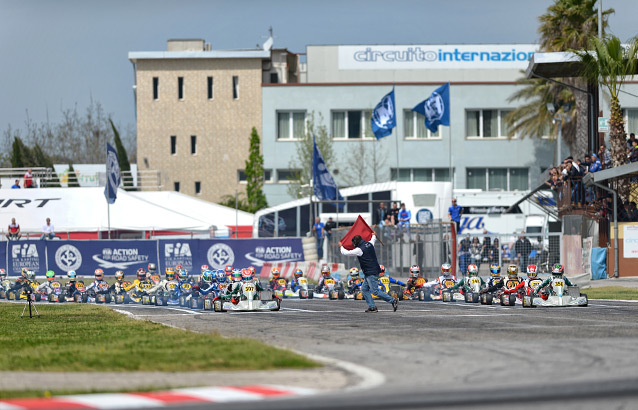 Corberi escaped by 1.5” in front of Fasberg by mid race. Federer gave way to Alberto Cavalieri (Righetti / Modena) for 3rd position, and Joel Johansson (Energy / TM) was fighting with Piccini for 6th. The incredible Cavalieri was equipped with new tyres and had started 16th, then took 2nd position ahead Fasberg, while Alexander Schmitz (Tony Kart / Vortex), also on new tyres, was delayed at the start and was now setting fastest laps in 22nd.

Corberi crossed the finish line in 1st place, but was given a penalty of 5” for jumping the start and dropped to 6th, giving the victory to Cavalieri, with Fasberg 2nd, Federer 3rd, Kremers 4th and Johansson 5th. Gonzales finished 9th, Besancenez 12th, with 10 places regained, and Laurent, not as virulent than usual, in 14th.