Home News International Camponeschi victorious in the finals ahead of Hanley

Camponeschi victorious in the finals ahead of Hanley 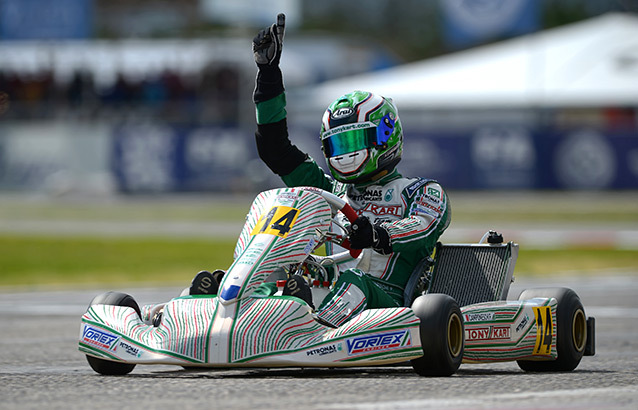 Flavio Camponeschi (Tony Kart / Vortex) marked his territory from the start, getting the better of his teammate Marco Ardigo (Tony Kart / Vortex). Ben Hanley (Croc Promotion / TM) was quick to come between the two on the third lap, and the positions didn’t change until the finish. Jeremy Iglesias (Alpha / TM) gave up his 4th to Patrik Hajek (Praga / Parilla), even dropping to 7th, but eventually recovering 5th. Rick Dreezen (Ricciardo / Parilla) broke down before the second lap.

The brawl in the middle of the pack fortunately sustained attention to the finish. Douglas Lundberg (Kosmic / Vortex), Jordon Lennox-Lamb (BirelART / Parilla), Simo Puhakka (CRG / Maxter), Anthony Abbasse (Sodi / TM) and Arnaud Kozlinski (Sodi / TM) who battled fiercely for several laps. Abbasse was back to 6th with two laps to go, Kozlinski was about to pass Lundberg to gain 7th place, but the Swede closed the door when the French driver had already committed. Kozlinski flew through the air before hitting Abbasse, wounding him in the accident.

Camponeschi was celebrating his victory with a big smile on the top step of the podium, Hanley 2nd with the fastest time of the race, Ardigo 3rd ahead of Hajek and Iglesias. Puhakka finally took 6th place ahead of Lundberg 7th, Lennox-Lamb 8th, Mirko Torsellini (Ricciardo / TM) 9th and Jonathan Thonon (Praga / Parilla) 10th on the line after a rise of seven places, showing the return to form for his machine. In 12th position, Bas Lammers (Formula K / Parilla) gained 13 postions finishing 12th after retiring in the prefinal. 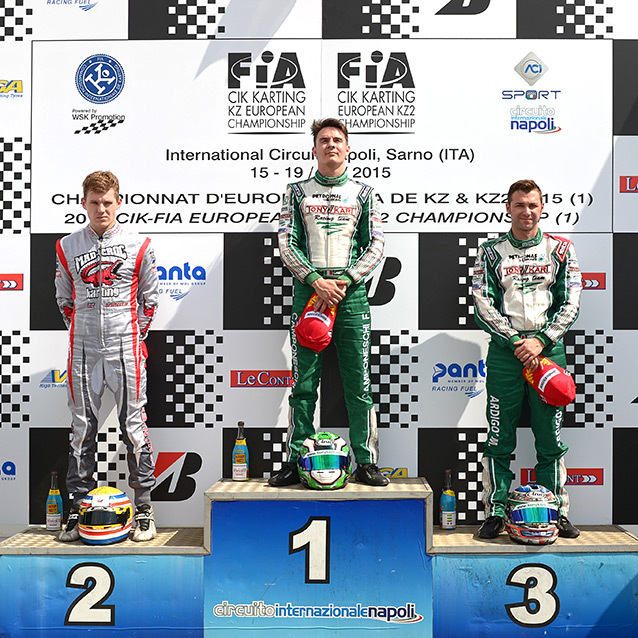