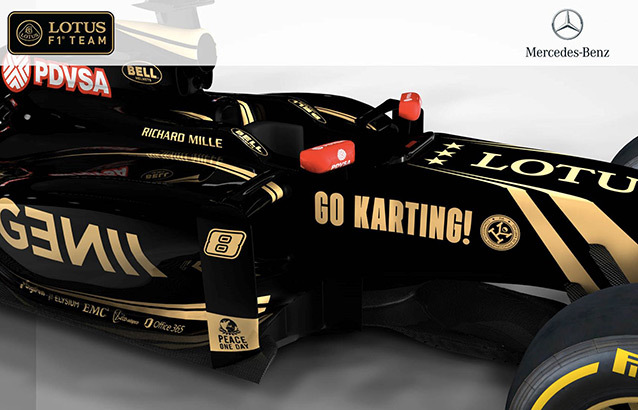 Lotus F1 Team is, this weekend, supporting the racing category where virtually all Formula 1 drivers began their careers; go karting.

The team is running “GO KARTING!” signage alongside the CIK-FIA logo on both Lotus F1 Team E23s at the Bahrain Grand Prix, located on the sides between the sidepods and front suspension.

The team has offered the signage space on the cars of Romain Grosjean and Pastor Maldonado free of charge to the CIK-FIA, and it is the latest example of its support for the development of racing drivers.

Lotus F1 Team has a significant history in supporting drivers at various levels of the driver development ladder, and has continued its support into 2015.

Shaikh Abdulla bin Isa Al Khalifa, President of the CIK-FIA, commended the Lotus F1 Team for their support right back to the very grassroots of motor sport development.

“It can be easier for teams at the pinnacle of motor sport to pick and choose from drivers that have worked their way through the development ladder and are the finished product – or close to it,” said Shaikh Abdulla. “It is another thing for these teams to play an active role in the development of drivers; which Lotus F1 Team does.”

“It all starts with go karting – Pastor Maldonado and Romain Grosjean both started there, as did all of the drivers in Formula One and all of the other major categories in the world. We greatly appreciate the opportunity to promote go karting and attempt to get more people involved in the sport – and we thank Lotus for allowing us to do this on the biggest stage in motor sport.“