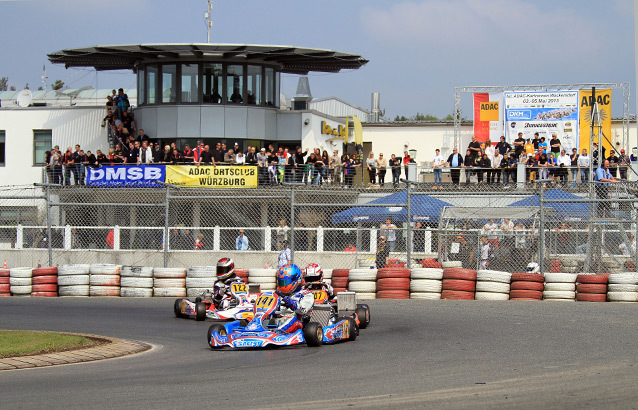 In three weeks the German Kart Championship is going to wake from its hibernation. The kick-off to the 2015 season is going to take place in Wackersdorf (Upper Palatine). Thrilling races can be expected in all three grade series DKM, DSKM and DJKM. Everyone who wants to join can hand in their registration at the DMSB.

The German Kart Championship has made a name for itself during the past years as one of the greatest racing series and promises an exciting program for 2015 as well. The drivers are going to start on the best race tracks in Germany and Belgium. The Prokart Raceland Wackersdorf is going to be the starting point during the first weekend of May. The 1.275m long track in Upper Palatine is one of the most modern tracks in Germany and has been the venue for European and World Kart Championships quite a few times during the past years.

The fields of participants of the three DMSB grade series are strongly manned once again. At the DKM, quite a few international top drivers are going to start, while a couple of hopeful talents from Germany are going to participate as well. The field of the German Junior Kart Championship is made up similarly: More than 30 youngsters have registered and want to follow in the footsteps of reigning champion David Beckmann. The strongest force are the shifterkarts: Alongside the CRG factory drivers Paolo de Conto and Simon Puhakka, drivers from more than 14 nations are going to start.

The DKM provides professional surroundings with a permanent organizational team, a modern race control and a video live stream with up to 20 hours of live images of every racing weekend. After the race in Wackersdorf, the DKM is going to take place in Belgian Genk, Ampfing, Oschersleben and the Erftlandring in Kerpen for the big finale.

Registrations can still be handed in for all classes (KF junior, KF and KZ2). These can be found on the DKM website via the following link:www.kart-dm.de.