The European season starts at Sarno with KZ and KZ2 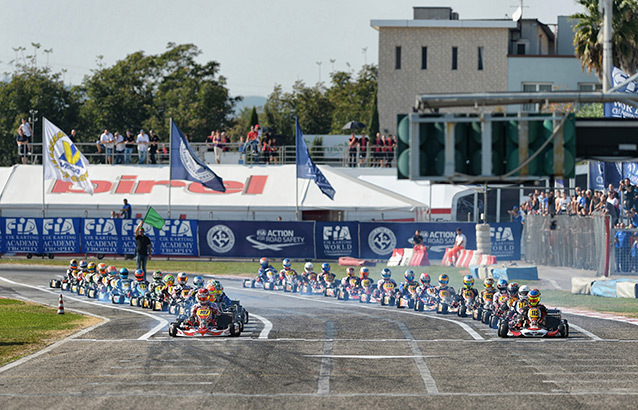 Like last year run over three Competitions, the CIK-FIA European Championships for KZ and KZ2 will begin their 2015 tour in Italy. At the foot of Vesuvius, the Circuito Internazionale Napoli at Sarno is ideal for this first European confrontation for the powerful 125cc gearbox karts.

A total of 92 drivers from 19 nationalities are involved in the Competition, which runs from April 16th to 19th, 2015 on the 1699 metre Sarno track. Two Americans, one Japanese and one Russian appear on the lists. 24 chassis makes and 6 engine manufacturers will compete at this first European Competition. KZ will mount the Bridgestone Prime tyres, well known after being used in 2014. KZ2 will use the Option tyre from the Italian manufacturer LeCont after winning a tender from the CIK-FIA this season. The 2015 CIK-FIA European Championship for KZ and KZ2 will then continue in at the Zuera circuit at the end of May before concluding in mid-July at Genk in Belgium.

Two Drivers will be particularly in focus as title contenders in KZ. Firstly the carrier of the number 1, the Belgian Rick Dreezen (Ricciardo Kart-B’stone-Parilla), the outgoing champion, but also and especially the Italian Marco Ardigo (Tony Kart-Vortex-B’stone), who was crowned the World Champion in the discipline at the same circuit of Sarno last October. The European Champion in KZ2 in 2014, the Italian Andrea Dale (CRG-Maxter-B’stone) will debut in the top category because of his new status, but given his performance last year, he should not be out of place. The stars of karting will be waiting to complicate the task of these favourites with a goal that cannot be faulted. The Belgian Jonathan Thonon (Praga-Parilla-B’stone), several times a winner worldwide, who will wear the number 2 position synonymous with European Vice-Champion, the Dutchman Bas Lammers (Formula K-Parilla-B’stone ), the Briton Jordon Lennox-Lamb (BirelART-Parilla-B’stone), the Italian Paolo De Conto (CRG-Maxter-B’stone) all have at least one European title to their name and the motivation to get another, not to mention the Italian Davide Fore (CRG-Maxter-B’stone), the four-time World Champion who is always looking for victory at forty years old, or the French Arnaud Kozlinski (Sodi-TM Racing B’Stone), the World Champion in SKF in 2009. A surprise could also come from the rising stars of the category such as the Dutchman Jorrit Pex (Intrepid-TM-B’stone), the Italian Mirko Torsellini (Ricciardo Kart-TM Racing -B’stone), the French Anthony Abbasse (Sodi-TM Racing B’stone) or the Finn Simo Puhakka (CRG-Maxter-B’stone), two particularly fast drivers this season.