Home News International Vartanyan ahead of Tiene KF in Prefinal B

Vartanyan ahead of Tiene KF in Prefinal B 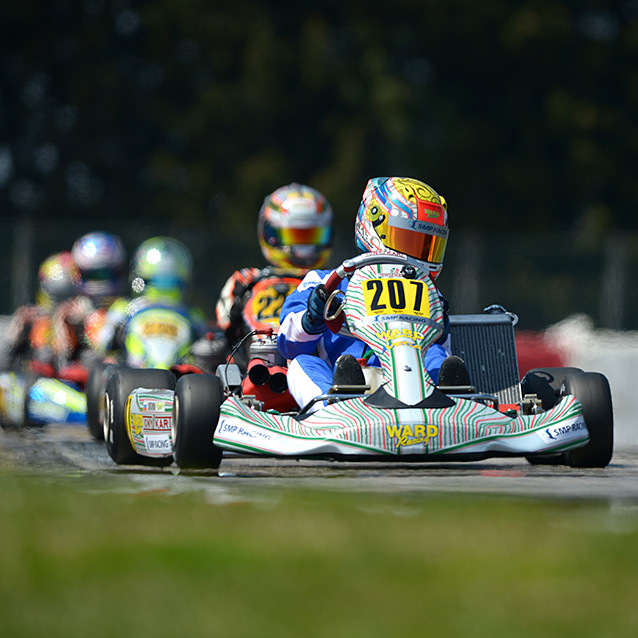 Alexander Vartanyan (Tony Kart / Vortex) started rapidly in prefinal B, with an already substantial lead after the first lap ahead of Max Fewtrell (FA Kart / Vortex). Martijn Van Leeuwen (CRG / TM) recovered quickly, however, 2nd place was taken by Felice Tiene (CRG / Parilla). Maxime Potty (Kosmic / Vortex) was unleashed after his troubles on Saturday and was already in the top 10 on lap 3, with 10 places gained. Van Leeuwen attacked Vartanyan from the fourth lap. We noticed Andreas Jochimsen (Croc Promotion / TM) entering the top five ahead of Matteo Vigano (Top Kart / Parilla) and Benjamin Lessennes (Zanardi / TM). Pedro Hiltbrand (CRG / Parilla) took 4th position in mid-race, but three seconds of penalties put him in 6th place while Vartanyan was pushed by Tiene. Potty dropped down to the fateful 17th. Lorenzo Travisanutto (PCR / TM), who had lost a lot of ground on the first lap was back in 11th place. Vartanyan won with the fastest time and was 1.8 seconds ahead of Tiene. Fewtrell took 3rd ahead of Van Leeuwen, Joachimsen was 5th and Hiltbrand 6th.