Sargeant suffers a nasty blow in the World Championship

Not being able to participate in the finals of the World Championship, especially when on the pace until then, creates understandable disappointment. This was the misfortune that Logan Sargeant experienced in France last weekend during the 2014 World KF-Junior, through no fault of his own. 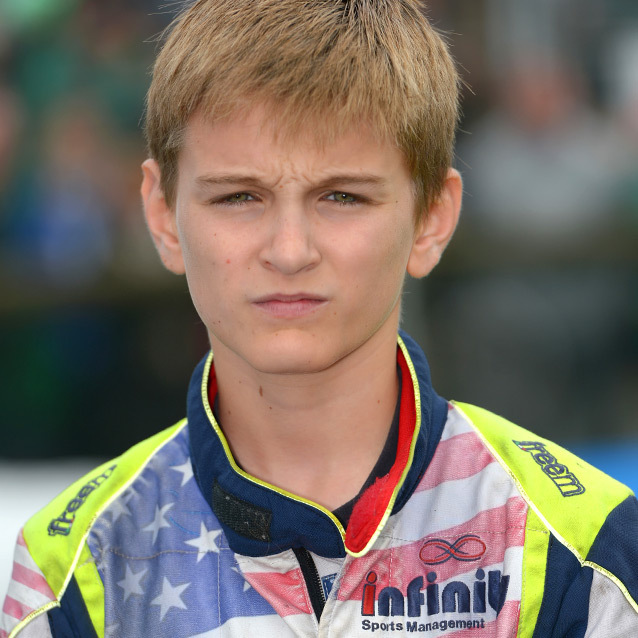 As well prepared as his FA Kart-Vortex-Vega from the RFM team, the young American driver was in the top five in free practice on the unique circuit of Essay. With the 3rd fastest time in his group, 25 thousandths from pole, he found himself 11th overall out of the 94 entries and attacked the heats in a very good mood. He regularly ran in the top five, except in the last race where a collision dropped him to 12th. Nothing too serious as his 11th place in the intermediate classification allowed him to start on the third row of prefinal 1, which would qualify him for the final.

While it was raining in the region, Logan’s expectations were stopped on the first lap of prefinal 1, when he was more or less speared by a newcomer to international competition, the Argentine Kevin Aron Quevedo. The driver was penalised after the race for his bad manoeuvre, but the damage was done and Logan went from 6th to 30th position. Despite his best efforts, he could not move back up enough to qualify for the final, so the story ended there, with a bitter aftertaste.

The balance of the World Championship, like the entire season, nevertheless remains positive in terms of performance as Logan has proven that he now has a place among the best. He can look forward to the future with legitimate ambitions.

2nd place at Adria to finish off the season in Europe