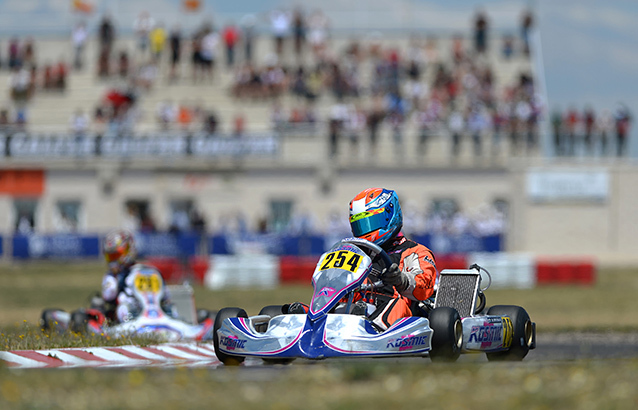 Penalized 10” in the prefinal, Ulysses De Pauw (Kosmic / Parilla) started the 15 laps of the KF-Junior final in 17th position instead of his 3rd place. The polesitter Anton Haaga (Kosmic / LKE) was overtaken at the first corner by Daniel Ticktum (Zanardi / Parilla), followed by Artem Petrov (DR / TM). Juan Correa (Energy / TM) moved up to fourth from Benjamin Lessennes (Kosmic / Parilla) and Mick Junior (Tony Kart / Vortex). Max Fewtrell (FA Kart / Vortex) dropped to 29th position. Haaga took back second position and then attacked Ticktum without hesitation for the lead on the 3rd lap.

At the halfway point, Mick Junior was threatening the leader Ticktum and beyond while Haaga joined them, and then in turn passed the British driver. Petrov followed suit and took third position. Ahmed continued his efforts and was now sixth with Sargeant, Correa and James Pull (Tony Kart / Vortex) after him. DeFrancesco was near the top 10. Haaga took control on lap 10 in front of Mick Junior. On the next lap, Lessennes and Ticktum attacked Mick Junior who was now fourth. Haaga did not have time to escape and he had to hold off Lessennes with Ticktum waiting in ambush.

Ahmed took 4th place on lap 13. On the last lap, Lessennes then attempted another attack on Haaga, but the Swedish driver defended and Ticktum took second. Lessennes and Mick Junior crashed and went off the track. Haaga won after a great battle ahead of Ticktum and Ahmed who took an unexpected podium. Petrov finished 4th, but DeFrancesco’s rise to 5th position especially increased the interest in the title race. De Pauw was 8th and fastest and would have a role to play in different circumstances. Tom Leuillet (Birel / TM) did well to finish 14th. 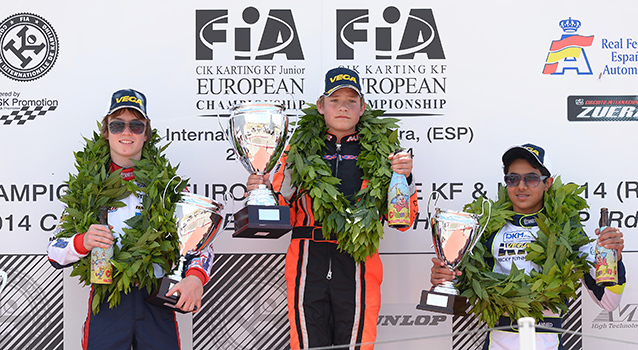