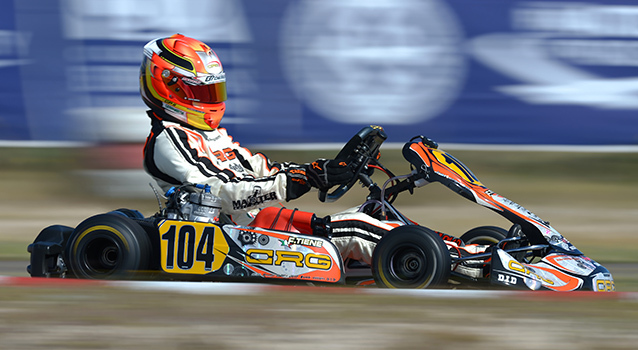 There was a holiday atmosphere at Zuera for the spectators with a very slightly cloudy sky, 23 ° C and a gentle breeze. On the track, the battles were intense since early morning. The starts in KF-Junior have had trouble getting the speed right, with drivers often speeding far ahead of the yellow line. There were several problems on the Dunlops in KF with the temperature a little higher, causing punctures for example for Gabriel Aubry in qualifying and Karol Basz (Tony Kart / Vortex) in the first heat. After four hotly contested races in both categories, here’s the situation halfway through the day.

Anton Haaga (Kosmic / LKE) leads KF-Junior with two victories against David Beckmann (Tony Kart / Parilla), who won the only race he has contested. After a substantial win in the first heat, Devlin DeFrancesco (Tony Kart / Vortex) had to concede in the second. Ulysses De Pauw (Kosmic / Parilla) and Artem Petrov (DR / TM) have been very competitive in the leading group. Daniel Ticktum (Zanardi / Parilla) is consistent – 3rd and 4th – but not overwhelming, Benjamin Lessennes (Kosmic / Parilla) has picked up 3rd and 5th places. After a 3rd place, Enaam Ahmed (FA Kart / Vortex) then dropped to 17th, while Mick Junior (Tony Kart / Vortex) got a 5th and a 14th position. Charles Milesi (Tony Kart / TM) took a beautiful 11th place, Tom Leuillet (Birel / TM) was 14th and 8th, Alessandro Brozzoni (Energy / TM) has achieved an interesting 15th position after his troubles at the start of the meeting.