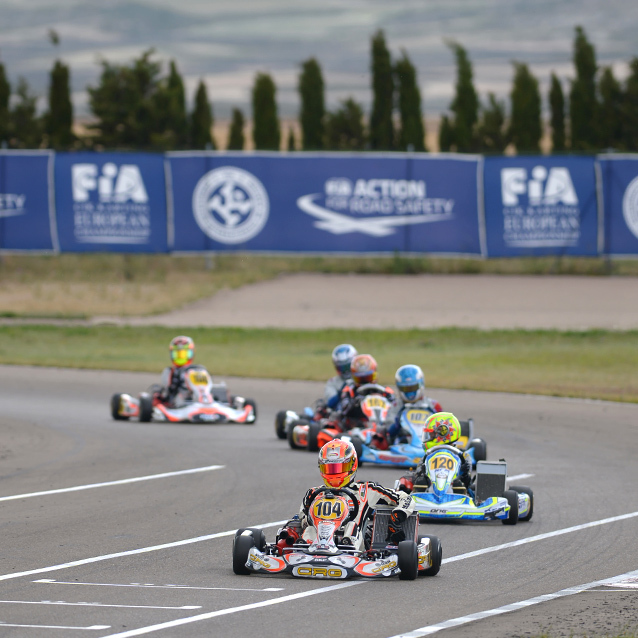 After an excellent day with three wins and a 4th place, Felice Tiene (CRG / TM) moved ahead in the intermediate classification in KF at Zuera. As consistent as he was efficient, Niko Kari (Tony Kart / Vortex) was second, just one point behind the leader, while Nicklas Nielsen (Kosmic / Vortex) took 3rd position with ease by winning the last race of the day. Lando Norris (FA Kart / Vortex) finished with a double victory and is 4th, with the same total as Tom Joyner (Zanardi / Parilla). There was a remarkable performance from Karol Dabski (Praga / Parilla) in sixth position ahead of Jehan Daruvala (FA Kart / Vortex), Callum Ilott (Zanardi / Parilla) in 8th, who lost a lot of places in the A against B heat. Alessio Lorandi (Tony Kart / TM) is 9th and Nikita Mazepin (Tony Kart / Vortex) 10th.

Gabriel Aubry (Tony Kart / Vortex) made a magnificent comeback to 11th position after his disappointment and his 57th place in qualifying. Julien Darras (Kosmic / Vortex) fulfilled its mission to come back to 15th before suffering a heavy penalty that dropped him to 26th position. Paolo Besancenez (Tony Kart / TM) ended with a superb 3rd place and finished in 19th, despite an engine failure in the first heat. Nicolas Gonzalez (Kosmic / Parilla) has reversed his fortunes after mechanical problems early in the meeting and is in 24th. Alexandre Gadois (FA Kart / Parilla) is 49th and will have to go all out in the repechage.