Success shared by Camplese and Zanchetta in KZ2, Marco Maestranzi dominator of KF2, while Garofano and Mosca won the KF3. Hauger and Skeed one win each in 60 Mini. 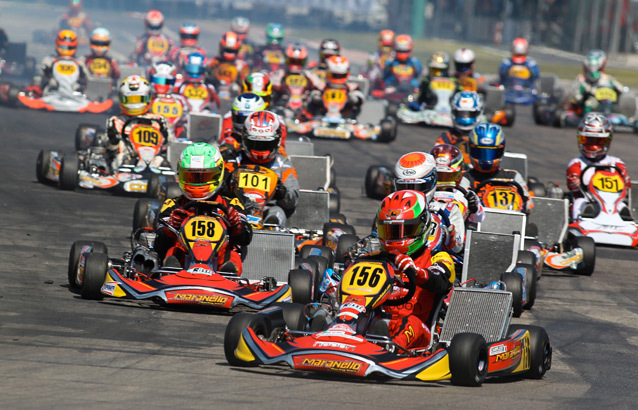 The first round of the Italian ACI-CSAI Karting Championship took place at the International Circuit La Conca of Muro Leccese with a good lot of drivers and a good spectacle on track.

The opener of the Italian Championship has been run by 140 drivers coming from 13 different countries. The most represented nation was Italy but several drivers came also from Russia, Spain, Sweden, Switzerland, Belgium, France, Czech Republic as well as from some other oversea countries like United States, Brazil, Venezuela, Canada and Indonesia. Several high ranked brands and official teams were also present.

Very good participation in KZ2 with 51 drivers on track, as in the case of 60 Mini that had 52 drivers on track, while 14 drivers made it to the track in KF2 and 24 in KF3. These figures are destined to increase in the coming races that will take place in the center and north of Italy.

The KZ2 scene has been dominated by Lorenzo Camplese (who has also been the poleman) and Marco Zanchetta, both on Maranello-TM, the first racing for Maranello Kart while the second for Gerber Team Corse, as they have won one final each. The category lived also on a series of good duels showing a very high level of competitiveness. The first final went to Lorenzo Camplese (Maranello-TM) who led team mate Marco Zanchetta and Francesco Celenta (Energy-TM), as the latter two have always been among the pace setters. The second final witnessed Zanchetta’s comeback – due to the grid inversion – who proceeded at the flag the very good Celenta, while the fight for the podium has seen the last two championships winner Alessandro Giulietti on Intrepid-TM securing the last available spot. 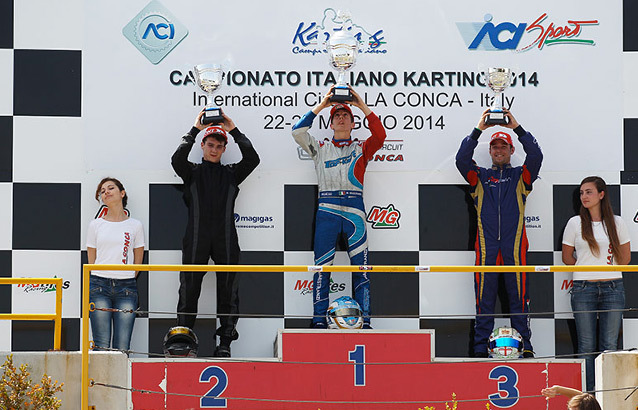 In KF2 the driver from Trento Marco Maestranzi (Top Kart-TM), has dominated the whole weekend with the best time in qualifying and the victory in two heats and in the two finals. Maestranzi took an easy win in the first Final proceeding the local hero Adriano Albano (Tony kart-TM) and Andrea Moretti (Exprit-TM), as the latter successfully completed a comeback race. Maestranzi recovered all the way from the eighth place handed him by the grid inversion in final two and won the race leading Moretti that hauled a good second. The third place was inherited by Stefano Villa Zanotti (Tony Kart-Vortex) in consequence to the 3 seconds penalty handed to Antonio Romanucci (Tony Kart-TM).

The success in KF3 has been shared by Remigio Garofano (Tony Kart-LKE), who has also been protagonist of the first part of the weekend, and Tommaso Mosca (Birel-TM) who won final-2 proceeding Garofano. The second place of final one has been clinched by the American Devlin Defrancesco (Tony Kart-Vortex) while the Canadian driver Kami Moreira-Laliberte (Tony Kart-TM) was third. The third place in the second final went to Davide Lombardo on Exprit-Vortex.

The very tight 60 Mini has seen the Norwegian Dennis Hauger (CRG-LKE) of team Gamoto taking the win from Nicola Abrusci (Tony Kart-LKE) of Baby Race to Mattia Michelotto (Top Kart-Parilla) of team Giugliano. The secodn final took place in two sessions due to a sudden storm that made organizers stop the race at lap 4. At the restart, the Italian Skeed (Top Kart-Parilla) got the win for team Giugliano, as in the sprint to the line he managed to top Hauger and the other quick driver of Gamoto Muizzuddin Mussyaffa Abdul.

TV SPECIALS
In the week from 1 to 8 June several specials will be aired by RAI Sport2, Nuvolari, Auto Moto TV, San Marino RTV, Dinamica Channel and other 60 national channels.