There will be a change of scenery for the second Competition of the 2014 CIK-FIA European KF and KF-Junior Championship on the 28th May to 1st June. The spacious Spanish province of Zaragoza, Aragon, will host European competitors at the fast Circuito Internacional Zuera. Several parameters could shuffle the pack after the first Competition at La Conca which was won by two British drivers, Callum Ilott in KF and Enaam Ahmed in KF-Junior.

Much appreciated by the Drivers, the Zuera track is probably the most unusual on the 2014 CIK-FIA European calendar. 1,700 m long, wide and fast, the Spanish track makes great use of engine power and of slipstreaming. In contrast to La Conca, one of the most popular tracks in Italy, Zuera could allow drivers who haven’t got a lot of races under their belts this season to get back into the Championship. Lastly, the weather conditions of the region are difficult to predict at this time of the year. Summer weather and temperatures of 30 ° C are just as likely as storms and rain. The thirst for revenge of some participants, determined not to miss the opportunity to score significant points in the standings, will complement data from a Competition that looks very promising, with entries up slightly: 71 in KF and 74 in KF-Junior.

Two Drivers got away from the pack in KF at La Conca. Lando Norris (FA Kart-Vortex-Dunlop) dominated the first part of the Competition, but Callum Ilott (Zanardi-Parilla-Dunlop) regained the lead in the closing stages. The two Britons are currently on the rise and it isn’t possible to make any forecast of their supremacy. 3rd in the Championship, the Finn Niko Kari (Tony Kart-Vortex-Dunlop) could consolidate his position by mixing with the struggle for victory, while the Spaniard Pedro Hiltbrand (CRG-TM-Dunlop) will have the the advantage of competing at home. But the race will be more than these Drivers, as other excellent Drivers are due to return to the forefront. Everyone remembers the incredible comeback for the Italian Felice Tiene (CRG-TM-Dunlop) in the Final at La Conca. Among the drivers to follow, we must not forget Nicklas Nielsen (Kosmic-Vortex-Dunlop), Karol Basz (Tony Kart-Vortex-Dunlop), Martijn Van Leeuwen (Zanardi-Parilla-Dunlop), Gabriel Aubry (Tony Kart-Vortex -Dunlop), Tom Joyner (Zanardi-Parilla-Dunlop) or Alessio Lorandi (Tony Kart-TM-Dunlop). 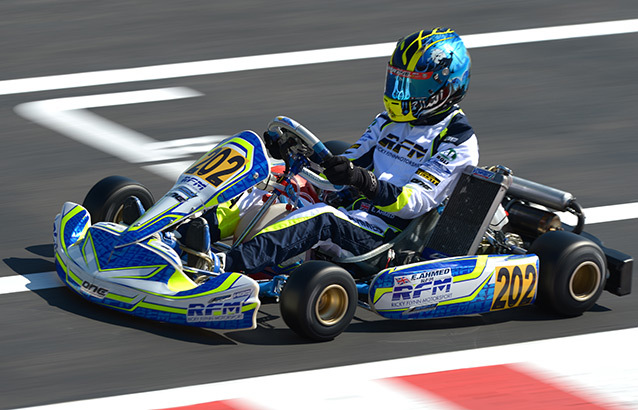 KF-Junior: Revenge for Defrancesco on Ahmed?

Meet at Zuera from Thursday, May 29th for the first Free Practice, and Qualifying Practice begins on Friday, May 30th at 4:40 p.m.