Although a large proportion of the entry had already participated in several races this year at the La Conca circuit – the WSK Champions Cup and WSK Super Master Series – the first round of the CIK-FIA KF and KF-Junior European Championship wasn’t a rerun of previous competitions. The attraction of major titles, the emergence of new competitors and the official CIK-FIA presence gave greater intensity to the event, which was held from May 8th to 11th at Muro Leccese. WSK Promotion also did everything possible to highlight the event. 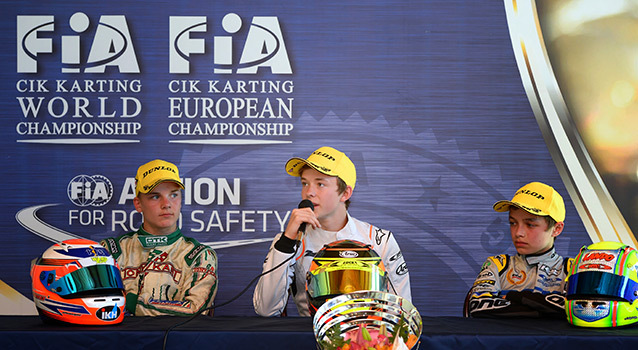 Strictly regarding sporting matters, there were no revelations, but the racing kept its promises until the end of the finals which were won by drivers who recovered well at the expense of the favourites who had dominated until then. The scenario was eerily similar in both categories. In KF, Lando Norris (FA Kart / Vortex) had dominated qualifying and the heats as did Devlin DeFrancesco in KF-Junior. Both drivers were undoubtedly the strongest on Saturday night. But Norris’s equipment went off a bit in the final stages and Callum Ilott (Zanardi / Parilla) won ahead of Niko Kari (Tony Kart / Vortex) and Norris. In Juniors, DeFrancesco won the prefinal, but was overtaken by Enaam Ahmed (FA Kart / Vortex) and Logan Sargeant (FA Kart / Vortex) in the final. Another similarity was two spectacular comebacks in the last races: Felice Tiene (CRG / TM) in KF from 25th to 4th position and Benjamin Lessennes (Tony Kart / Parilla) in KF-Junior, who started 33rd and was 8th on the line before being demoted to 17th place by a penalty.

The progress of the European Championship promises to be exciting, especially as the calendar has four events and points are being awarded for the top 10 in the heats, instead of just the top in 15 finals. There will already be revenge in the air in two weeks at Zuera in Spain …

All calendars in real time on Kartcom!

Kartcom wishes you the best for 2021