Although the most recent round of the WSK Super Masters didn’t bring the expected results, Devlin DeFrancesco enjoyed great success at the first round of the European KF-Junior Championship two weeks later at the same circuit of La Conca in southern Italy. A very competitively set-up Tony Kart-Vortex, developed by the Morsicani Racing team, enabled the young American driver to monopolise the top spots for most of the race weekend. Devlin is also in second place in the provisional standings of the CIK-FIA championship. 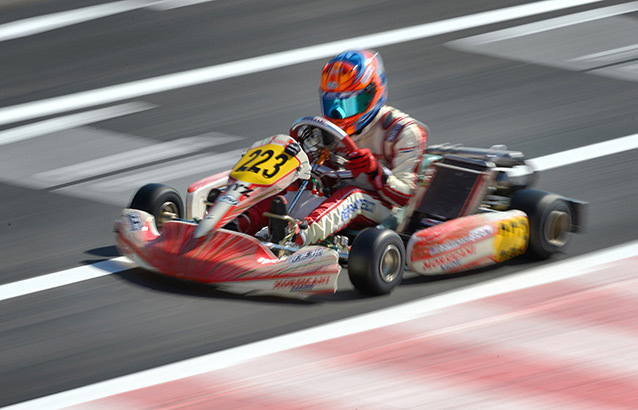 With great clarity, he analyzed the reasons for his third-place finish in the press conference: “It’s my fault, I tried a middle line at the start, when I was in pole position, to carry more speed. It had worked for me at Sarno, but it didn’t work here. After that I gave everything at each corner to remake the lost ground, without thinking about the result. It was very hard physically.”

The meeting was marked by outstanding performances from DeFrancesco. The team put in a lot of development work during free practice and everything was in order for qualifying, with Devlin taking pole, a tenth faster than his pursuers. He then won three out of his four heats, finishing second in the last and took another win in the prefinal with an lead of 3.6” after the 13 laps. The final started badly, causing Devlin to wobble several times after the start and he finished the first lap in 8th place. His reaction was immediate and he began a courageous climb to third position, but the top two were too far away to be reached.

The balance was ultimately very satisfying at the end of the first European round at La Conca. Devlin is in second place in the provisional standings, five points behind the leader, and there are still three events to go.

DeFrancesco always on the attack in KF-Junior

DeFrancesco already running in the top 10