French F4: Boccolacci masters his rivals and the streets of Pau

The second round of the 2014 French F4 Championship took place in the context of the 73rd Pau Grand Prix (9-11 May). This gave the 23 Auto Sport Academy trainees the opportunity to test their skills in the streets of the French town. In the qualifying session young Frenchman Dorian Boccolacci proved his skills between the guardrails in the city by setting the two fastest times. He won races 1 and 3 from Dane Lasse Sorensen and Anglo-Swiss Felix Hirsiger. In race 2 victory went to Russian driver Denis Bulatov followed by Finn Simo Laaksonen and Frenchman Valentin Moineault. The next round for the young chargers is at Val de Vienne on the Le Vigeant circuit on 4-6 July. 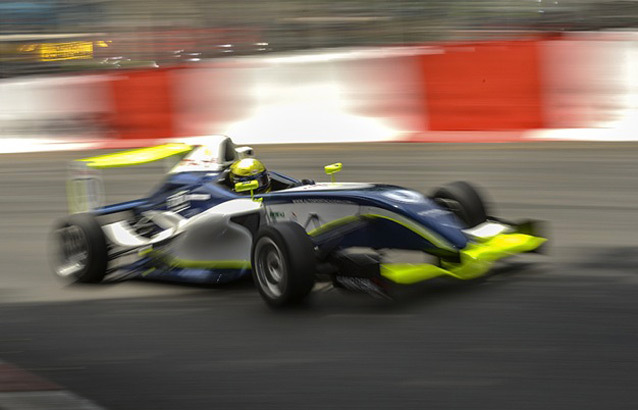 In qualifying Dorian Boccolacci’s speed showed that he would be the man to watch during the weekend. He set the two quickest times in Friday’s session clinching pole for races 1 and 3. When the lights went out for the first heat in the city circuit he shot into the lead leaving Sorensen behind. On lap 2 there was a collision in the Lycée corner, which led to a traffic jam, and proved fatal to the hopes of Swiss-Albanian Gjergj Haxhiu, Swiss driver Paul Hockfelt Jr and Frenchman Bryan Elpitiya who were eliminated on the spot. Boccolacci drove home to a convincing victory closely followed by Sorensen and Hirsiger.

On Saturday afternoon Portuguese Joao Carvalho, who was tenth in the first heat, started from pole in race 2 thanks to the principal of the reversed grid and shared the first row with Simo Laaksonen. Carvalho, unused to being in this position, was soon swallowed up by Denis Bulatov who took the lead. Laaksonen held onto to second in front of Valentin Moineault who was able to fight his way up to third by taking advantage of mistakes by drivers in front of him on the grid.

The final race of the weekend was almost a carbon copy of the first. The whole field got off to a clean start, but the race was red-flagged at the start of lap 2 at the Lycée corner after a collision between Valentin Hasse-Clot and Paul Hockfelt Jr. After the restart Hugo Sugnot-Darniche, Bryan Elpitiya and Valentin Moineault all came to grief, the latter after a very optimistic overtaking move on Swiss driver, David Droux, who was also eliminated in the incident.

Boccolacci showed his mastery in the streets of Pau by scoring his second win of the weekend followed by Sorensen and Hirsiger whose third place had been under threat from Droux.

Boccolacci left Pau leading the Auto Sport Academy French F4 Championship with 92 points after the second round thanks to a big haul in Pau. Anglo-Swiss Felix Hirsiger is second with 79, two ahead of Lasse Sorensen while Australian Joseph Mawson, the early leader, has been pushed back to fourth after a blank weekend. In fifth is Amauary Richard with 50 points.

Next round: 4-5-6 July at the GT Tour meeting on the Le Vigeant circuit.