The young Frenchman rounded of a perfect weekend with his second victory, thanks to which he has taken the lead in the 2014 French F4 Championship. As in race 1 he saw the flag in front of the other two outstanding drivers of the weekend, Dane Lasse Sorensen and Anglo-Swiss Félix Hirsiger.

Although a rainy morning raised doubts as to what track conditions would be like for the final race of the weekend, the streets of Pau were completely dry in the afternoon when the ASA trainees lined for the start of race 3. 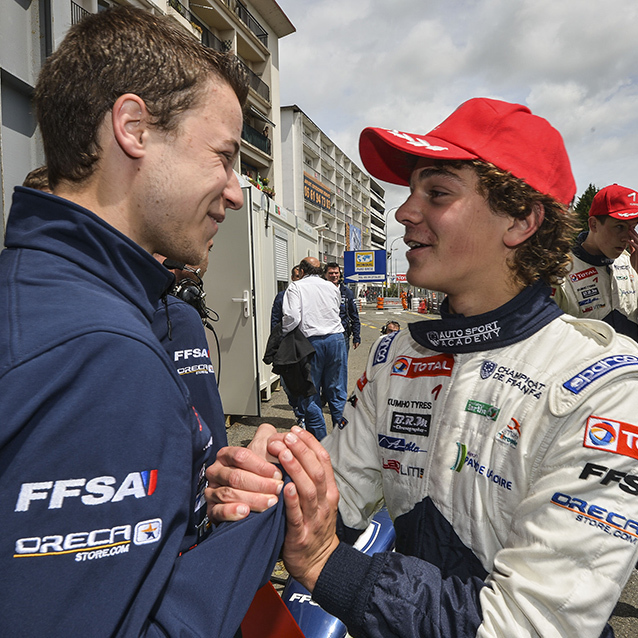 Dorian Boccolacci and Lasse Sorensen were on the front row while on row 2 were Swiss Paul Hokfelt Jr and Félix Hirsiger. The quickest driver in the second heat, another Swiss David Droux, was in fifth place with Valentin Hasse-Clot alongside him. All 23 drivers in the 2014 class got away without problems. Boccolacci, Sorensen and Hirsiger, who took third on lap 1, drew away slightly from their pursuers and were locked in a no-holds-barred battle between the guardrails. Although Sorensen was trying all he knew to pass Boccolaccci, the latter didn’t give him the slightest opening.

The race was interrupted at the start of lap 2 (as in the first heat) with a collision in the Virage du Lycée between Valentin Hasse-Clot and Paul Hokfelt Jr causing another traffic jam in the corner, which brought out the red flag. The main victims of this incident were championship leader Australian Joseph Mawson, Hasse-Clot, Denis Bulatov from Russia and Hokfelt Jr.

On the restart Boccolacci in first place made another perfect getaway. The young Frenchman seemed completely at ease in the streets of Pau despite being under constant threat from Sorensen. Behind these two Hirsiger led a group consisting of Droux, Valentin Moineault, Erwan Julé, Bryan Elpitiya and Amaury Richard.

The half-way point was marked by Hugo Sugnot-Darniche’s big shunt, which brought out the safety car again to facilitate the removal of the badly-damaged F4 single-seater. The lights on the safety car then went out and unleashed the pack who were all tumbling over one another as with only 8 laps of race 3 remaining it was all still up for grabs.

Boccolacci mastered the second restart perfectly and set about consolidating his lead, while Bryan Elpitiya went off in the Virage de la Gare. The field settled down in the closing laps, especially at the rear of the pack. This was not the case up front as Boccolacci and Sorensen were locked in battle in front of Hirsiger as the latter had to fend off Droux and Moineault who were hassling the Swiss driver.
In the closing minutes of the race the main excitement was provided by Moineault’s attempt to overtake Droux, which ended in tears for both drivers who did not restart. This gave Hirsiger some breathing space and he consolidated his third place.

Boccolacci scored a brilliant second win, which puts him in the championship lead. Sorensen finished second after an impeccable drive and Hirsiger in third bagged a big haul of points to boost his position in the overall classification.

Dorian Boccolacci: ”I made good starts, which helped me to hang on to first place throughout the race. I think I’m now leading the championship although I haven’t forgotten the fact that it’s only the second round the season. I’ve opened up a small gap, but my rivals are not far behind so I’m going to continue in the same vein, win more races and count my points at the end of the year.”