Ilott takes a big win in KF at La Conca

Ilott managed a lead of more than 5/10 from Kari, who was very fast. Nielsen was third. There was a big gain for Felice Tiene (CRG / TM) who was back in the top 10 in the on lap 6. Norris attacked Van Leeuwen for 4th place. Tiene kept coming back, he took Sitnikov for 8th position shortly before the halfway point. Aubry was also back in the top 10, Alessio Lorandi (Tony Kart / TM) was 15th after starting at the back. The gaps between the top three were more than a second, and in fourth Norris was 5/10 from Nielsen. But Lando attacked the Danish driver under braking on lap 16 and took 3rd place.

Hiltbrand passed Nielsen on lap 21 for 4th, and Tiene also attacked Nielsen to take 5th position. Although victory didn’t look like if would get away from Ilott, Norris closed on Kari for second and the battle raged for 4th position between Hiltbrand, Tiene, Nielsen and Van Leeuwen.

Ilott won the race by more than 2 seconds ahead of Kari who preserved his second position from Norris, the fastest on the track. Tiene didn’t wavered but Hiltbrand overtook again on the last lap to finish fourth with an extraordinary gain of 21 positions. Van Leeuwen finished 6th from Nielsen, Aubry was 8th ahead of Basz and Tom Joyner in 10th. 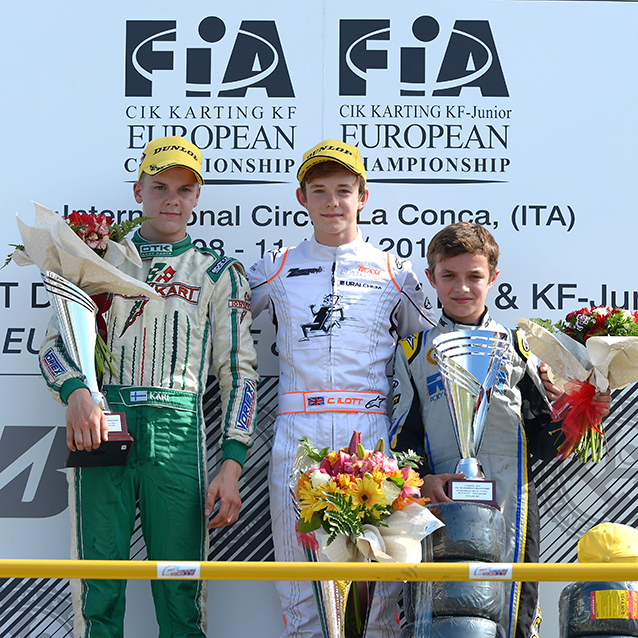