Russian driver Denis Bulatov took victory in race 2 (19 laps) to inscribe his name on the winners’ role call of the Pau Grand Prix after an impeccable drive. Simo Laaksonen from Finland finished second while Frenchman Valentin Moineault made a good comeback and saw the flag in third place. 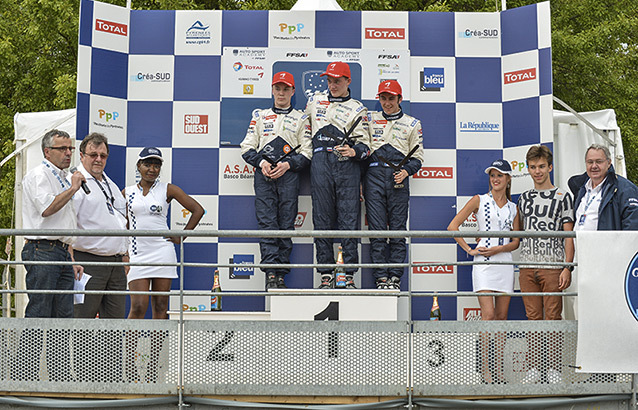 Joao Carvalho from Portugal, who finished tenth in race 1, was on pole for the second race in the streets of Pau. Alongside him on the front row was Simo Laaksonen while Denis Bulatov and Erwan Julé shared row 2.

Benoît Tréluyer, two-time winner of the Le Mans 24 Hours, and former graduate of the Elf programme led the 23 young ASA trainees round the twisty circuit on their formation lap. Carvalho made a perfect start and took the lead while Bulatov shot through from third place and latched on to the Portuguese’s gearbox.

Second time round Bulatov passed Carvalho at the Pont Oscar corner imitated the following lap by Laaksonen in the same spot. While this was going on Valentin Moineault attacked Swiss David Droux for sixth place in the Virage du Lycée. Amaury Richard, who made a solid start to the race, also overtook Carvalho to grab third. He was followed by Erwan Julé and Moineault who both got past the Portuguese on the following lap. Carvalho, who was not really used to being among the front-runners, created a traffic jam behind him in the city streets.

The drivers showed plenty of daring and were not afraid to take risks in the second race. Those who set the pace in the first heat Dorian Boccolacci from France, Dane Lasse Sorensen and Anglo-Swiss Félix Hirsiger went at it hammer and tongs for eighth place.

At half distance Julé tried to overtake Richard for third place, which he didn’t manage to pull off and Moineault took advantage of this to shoot past him. The young Frenchman continued to push and on the next lap he was hot on Richard’s tail. He slipped past his fellow-countryman to go into third. However, he had to keep a watchful eye in his rear-view mirrors as a squabbling group consisting of Julé, Droux, Hirsiger and Sorensen closed the gap. Valentin Hasse-Clot had a grandstand seat as he watched Boccolacci hassling Sorensen for eighth place. The winner of the first heat tried to find the right opportunity to pass – which never presented itself!

Up front, Bulatov had everything under control with more than a second in hand over Laaksonen whose second place was not under threat.

The closing laps of the race were fairly uneventful. There were no further position changes and the drivers seemed content to hold station as the second race of the day in the streets of Pau drew to a close.

The Russian flag floated proudly over the topmost step of the podium to celebrate Bulatov’s dominant victory from Laaksonen and Moineault, who scored his maiden top-3 finish this season. Pierre Gasly, 2013 Formula 2.0 Eurocup Champion, there to see the 73rd Pau Grand Prix, presented the Frenchman with his cup.