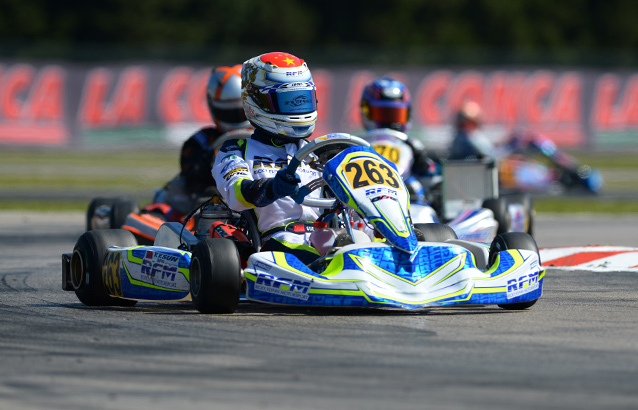 The gladiators in the KF-Junior Repechage took to the track in the sun, as it was already hot at La Conca. There was a collision that decimated the pack at the first corner, which was no surprise to anyone. Clement Novalak (Kosmic / Vortex) kept a cool head in front of Presley Martono (Tony Kart / TM), Kenny Roosens (Zanardi / TM) and Casper Roes Andersen (Energy / TM). Martono took the early lead ahead of Bard Verkroost (Tony Kart / TM), Sun Yeu Yang (FA Kart / Vortex), Roosens and Novalak. Lucas Légeret (Zanardi / Parilla) came back to 7th position ahead of Mauricio Baiz (CRG / TM). There was a super performance from Tom Leuillet (Birel / TM) in 11th behind Marta Garcia Lopez (Zanardi / Parilla). Yeu Yang took the lead with a lap to go and won the race ahead of Martono, Novalak, Verkroost, Légeret and Roes Andersen. Baiz finished 7th from Roosens and Garcia Lopez, Leuillet was 12th, and Milesi 21st after a problematic first lap.