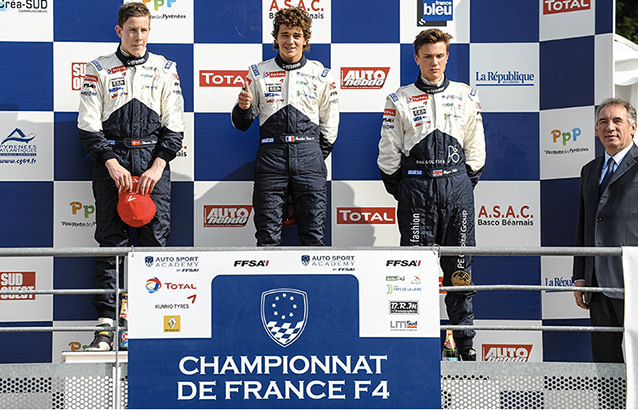 Dorian Boccolacci started from pole for race 1 and he was never headed in the streets of Pau. He scored a decisive victory, his first of the season, from Dane Lasse Sorensen and Anglo-Swiss Félix Hirsiger. On the topmost step of the podium the young Frenchman received his cup from François Bayrou, the Mayor of Pau.

Dorian Boccolacci and Lasse Sorensen shared the front row for the first race of the weekend thanks to the two quickest times they had set in qualifying the previous day. When the lights went out Boccolacci led the pack into the Virage de la Gare.

On lap 1 the positions were the same as on the grid with Boccolacci in front of Sorensen, Hirsiger and Swiss driver, Paul Hokfelt Jr. Second time round there was a collision in the Virage du Lycée when Australian Mawson tried to pass Hokfelt Jr, whom he hit pushing him into Hirsiger. This caused a traffic jam in the corner and it brought the field to a halt. Out came the red flag. The victims were Bryan Elpitiya, Hokfelt Jr and Swiss Albanian Gjergj Haxhiu whose cars were too badly damaged to continue.

On the restart there were several absentees on the grid and Boccolacci had to do it all over again. The young Frenchman didn’t put a foot wrong and made another perfect getaway. This time there were no incidents in the pack. On the next lap, Russian Vladimir Aotev retired after making a mistake in the Virage de la Gare. Sorensen was very quick and he put Boccolacci under extreme pressure although did not make a mistake. The Dane tried to pass the leader in several occasions but was unable to find an opening.

Behind the two leaders the field began to string out. Hirsiger was third while David Droux and Mawson were running wheel to wheel. Valentin Moineault, Amaury Richard, Erwan Julé, Valentin Hasse-Clot and Russian Denis Bulatov rounded out the top 10 with very little between them.
At half distance Hasse-Clot and Bulatov went head-to-head and the Russian got the better of the.Frenchman to snatch ninth place. Hasse-Clot was then the victim of an attack from Finn Simo Laaksonen, which led to the former’s retirement.

At the end of the race Hirsiger came under threat from Droux and Mawson: they were unable to overtake the Swiss driver who held on to his third spot. On the second-last lap a collision took place between Colombian Juan Manuel Jimenez Silva and Reuben Kressner from Sweden in the Virage de la Gare. Boccolacci completed his final lap without problems to take the chequered flag!

After investigation of the first incident the stewards excluded Mawson from race 1, which enabled Portuguese Joao Carvalho to clinch the final place in the top 10. Thanks to the reversed grid Carvalho will start on pole for the second race of the weekend with Laaksonen alongside him on the front row. Bulatov will share row 2 with Julé.

Dorian Boccolacci: “It’s very important to start on pole in Pau as overtaking is very difficult. I made a good first start and it was the same thing on the restart. Lasse Sorensen latched on to my tail straight away. We pulled away from the rest of the field, but he put pressure on me throughout the race. It was pretty hectic and difficult not to make a mistake. However, it went off well and I’m delighted to have won the first race.”