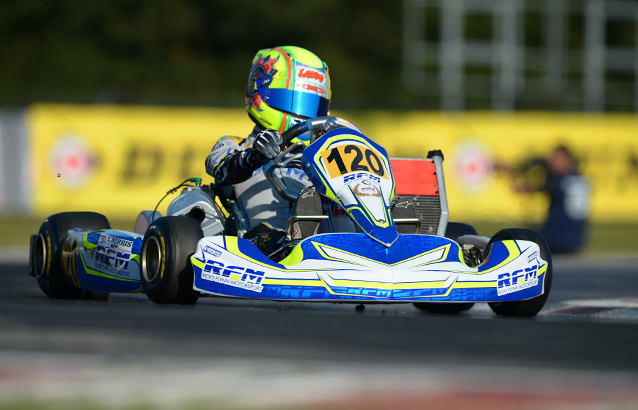 KF again took more time than KF-Junior to warm up the equipment and really get into the thick of things during their timed qualifying. Strangely, despite an entry of similar size to the younger participants, they have only two sessions to decide the order, with 34 or 33 on the track at once. It was not until the last three minutes of the first session that Karol Basz (Tony Kart / Vortex) went under 47”. After that there were fireworks which Felice Tiene (CRG / TM), Jehan Daruvala (FA Kart / Vortex), and Lando Norris (FA Kart / Vortex) who were ahead of Callum Ilott ( Zanardi / Parilla) by more than a tenth. Nicklas Nielsen moved up into the top three, then Norris did even better than a tenth with a lap of 46” 324 and Ilott was second with 46” 567, Nielsen was 3rd, Basz 4th, Daruvala 5th, Tiene 6th and Julien Fong (Tony Kart / TM) 7th.

The second session came gingerly out of parc fermé after two minutes of waiting, then a good two more minutes to reach a more consistent pace. It was only two minutes from the chequered flag when Pedro Hiltbrand dropped below 47”, replacing Gabriel Aubry (Tony Kart / Vortex) in the lead. Hiltbrand responded with 46” 822 and there was no reply. Aubry was 2nd, Nikita Mazepin (Tony Kart / Vortex) 3rd, Alessio Lorandi (Tony Kart / TM) 4th, Marco Maestranzi (Top Kart / TM) 5th, Leonardo Pulcini (Energy / TM) 6th and Xia Yifan (Tony Kart / TM) 7th. The second group was visibly slower than the first, but the conditions has changed significantly between the two. We can see that the Vega KF-Junior tyres would make the track faster for those who go out straight after KFJ, than the next session after the Dunlop rubber.