In the second F4 qualifying session of the year on the legendary Pau circuit Dorian Boccolacci pulled off a coup by clinching his maiden pole position after a thrilling session. Into second and third came Dane Lasse Sorensen and Paul Hokfelt Jr from Switzerland. 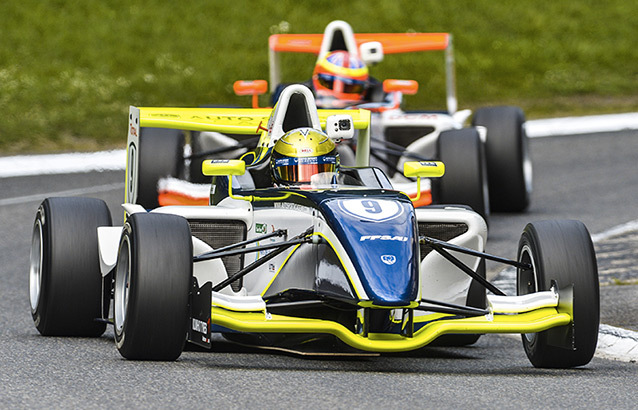 The second qualifying session of the season took place in ideal weather conditions. After a few laps in which the ASA trainees found their marks, the first benchmark times were set by Anglo-Swiss Felix Hirsiger who was very much at home on the Paul circuit straight away as he showed in free practice with the fastest lap.

At the halfway mark it was still all up for grabs and the young chargers upped the pace with Hokfelt Jr and Sorensen locked in battle for first place with Boccolacci and Droux close behind. Everybody was out to improve their times taking considerable risks and Swiss-Albanian Gjergj Haxhiu came to grief on the exit from Parc Beaumont, which led to the session being red flagged.

When the green flag was waved Sorensen knocked Hokfelt Jr off the top of the time sheets. Each time round the Dane improved and looked to have pole sewn up on the tricky Pau layout. The last five minutes were breath taking. Finally, Boccolacci put in a stunning lap to beat Sorensen and the young Lotus F1 Junior Team driver clinched the first pole of his fledgling single-seater career. He finished in front of the Dane, Hokfelt Jr and Hirsiger who were all very quick and provided the entertainment in this very particular challenge.

Droux had a good session to bag fifth in front of Valentin Hasse-Clot and Valentin Moineault who were both on the pace at the end of qualifying. The championship leader, Australian Joseph Mawson, had an off and the result was less track time in free practice, but he managed to make amends and snatched eighth spot. Bryan Elpitiya was ninth while Erwan Julé just made it into the top 10 at the very end of the session, which was stopped before the chequered flag after Finn Niclas Nylund crashed.

Dorian Boccolacci will start from pole for race 1, Saturday 10th May at 09h05, followed by Lasse Sorensen and Felix Hirsiger.