After the opening round on the Le Mans Bugatti circuit, the second event counting for the 2014 French F4 Championship will take place on the magnificent city circuit in Pau, which will host the 73rd running of this prestigious grand prix. For the 23 trainee drivers winning a race in these historic surroundings will be a real achievement – like Monaco in F1 – all the more so as it is at the beginning of their career in single-seaters. 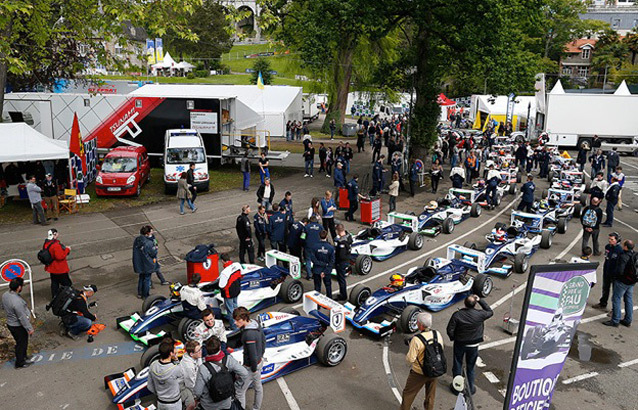 In the city where the Total Group, the main partner of the Auto Sport Academy, has its scientific and engineering research centre, the drivers in the French F4 Championship will provide spectacular entertainment in three hotly-contested heats between the rails in the capital of the Béarn region. Both spectators and drivers will have their fair share of thrills with, at the end of all that effort, the joy for the best of them of having their names inscribed on the roll call of winners of this legendary event.

Australian Joseph Mawson arrives in Pau solidly installed in the lead in the championship after his two victories and a third place in the Sarthe, which will also give him a psychological advantage over his closest rivals. However, he will have to stay on guard in Henri IV’s favourite town as Lasse Sorensen from Denmark, Frenchmen Dorian Boccolacci, Amaury Richard and Bryan Elpitiya, Félix Hirsiger from Switzerland as well as Russians Vladimir Atoev and Denis Bulatov are all determined to knock the Aussie off the no. 1 spot. They will be among the favourites for victory, but they won’t be the only ones!

Swiss Paul Hockfelt Jr was hit by mechanical problems in the first round, but his stunning comebacks will make him one to watch. He will be gunning for victory like hard-charging French youngster Valentin Moineault who was unlucky at Le Mans after being among the front-runners.

Between the guardrail in Pau on an atypical circuit on which anything can happen (and often does!) Valentin Hasse Clot, Erwan Julé, Reuben Kressner from Sweden, Finns Simo Laaksonen and Niclas Nylund are hoping to take the fight to the leaders and add big points to their tally.

David Droux from Switzerland, Tom Soubiron, Hugo Darniche, Swiss-Albanian Gjergj Haxhiu, Colombian Juan Manuel Jimenez Silva, Mexican Axel Matus and Joao Carvalho from Portugal all know that their progress and ability to get to grips with the Formula 4s will be assessed as the races unfold; and they will seize any chances given to them to move up the hierarchy.

Anouck Abadie, the only woman driver in the field, is continuing her learning curve and is hoping to close the gap to the top 10 this coming weekend. To do so in Pau would be a great source of satisfaction for her.

F4 Academy: A highly anticipated second half of the season