Many new features have been implemented by the CIK-FIA for the 2014 Championships with the goal of reducing costs and simplifying the running of Competitions. This will start at the first Competition of the CIK-FIA European Championships for the KF and KF-Junior categories on 8th to 11th May 2014 at the La Conca International Circuit in the south of Italy, for the 141 Drivers involved. 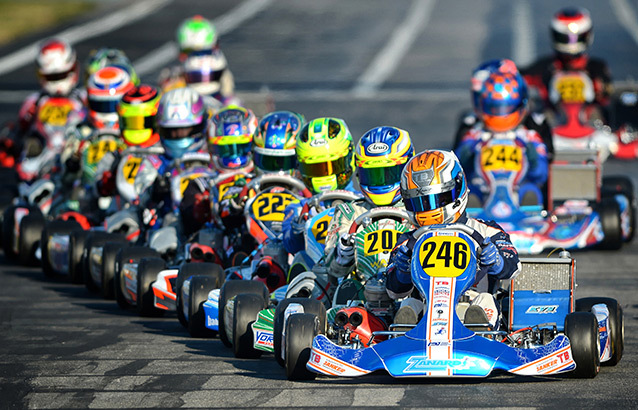 This year’s CIK-FIA European Championships for KF and KF-Junior will compete in four Competitions from early May to late August in Italy, Spain, Belgium, Sweden and the UK. The CIK-FIA has taken various measures to reduce the competitors’ budget by reducing the costs of entries, the duration of Competitions and expenditure on tyres. The new specification tyres have a longer life, so the amount of sets allowed is reduced. In KF Dunlop slicks of the “Prime” type will be used, and in the KF-Junior they will use Vega “Option” slicks. To make the running of Competitions easier, parc ferme for tyres has been removed. Permanent controls will be carried out using the barcode and the MiniRae Lite device will be used to ensure the necessary sporting equality. As in 2013, this year the CIK-FIA has entrusted the promotion of its European and World Championships to WSK Promotion.

The first Competition of the year will be held in Italy at the La Conca International Circuit with 141 Drivers present, 69 in KF and 72 in KF-Junior, from 31 countries and 4 continents. 15 chassis brands will have the opportunity to compete to win the CIK-FIA European titles.

Running in the first Free Practice will begin on Thursday, May 8th in the late morning, Timed Qualifying will take place on Friday, May 9th from 16.40 and the Qualifying Heats will occupy all of Saturday, May 10th. After the Second Chance Heats, the Prefinals will be held on Sunday, May 11th between 12:05 and 12:40, while the Finals will start at 14:20.