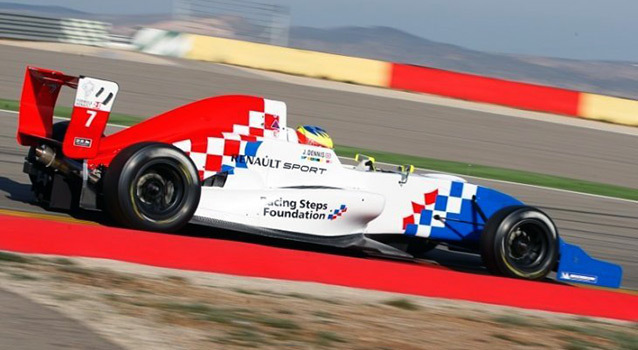 Esteban Ocon (ART Junior Team) set the quickest time on the Motorland Aragon circuit on the first day of collective testing this year. The 12 teams entered for the Euroucp Formula Renault 2.0 got off to a good start with their new cars, which showed excellent reliability and speed.

Today, a lot of hard work awaited the teams who were faced with sorting out their new cars as the Eurocup Formula Renault 2.0 collective tests started on the Motorland Aragon circuit. The first of the two days confirmed the reliability of the new single-seaters put at the disposal of the 12 teams entered.

In total, the 36 drivers covered over 2100 laps of the 5,344-km Spanish circuit. Out-and-out speed was obviously not the most important thing for the teams in the first session of the year, and they based their programmes around learning about the new Formula Renault 2.0 car.

The drivers had to cope with cold and windy conditions all day, but these didn’t stop them from making progress. Esteban Ocon (ART Junior Team) dominated the morning session and got to within 5/1000s of the 2012 pole time.

The young Frenchman opened up a gap over his nearest pursuer Nyck de Vries (Koiranen Motorsports) in the first sector in which he was 3/10s quicker than the Dutchman. Brandon Maisano (Prema Powerteam), who was one of the few drivers who shod new tyres in the morning, rounded out the top three.

After a short lunch break drivers and teams got back down to the nitty-gritty again. William Vermont (Arta Engineering) set the fastest time in the afternoon in the dying minutes of the session beating Oliver Rowland (Manor MP Motorsport) by a whisker, Ocon and de Vries.

Esteban Ocon: “I couldn’t wait to get out there! It felt great getting back into the car. I trained throughout the winter and I feel fighting fit. Although today’s times don’t really mean a lot you always keep an eye on them. It’s motivating to be the quickest this morning. The car’s very pleasant to drive; it has more mechanical and aerodynamic grip than last year’s machine.“

Nyck de Vries: “I was very happy to get back behind the wheel today after what seemed like an eternity! The team and I are doing a good job, but we’re not going for times at this stage of the season. I think the wind was a bigger problem than the cold: there was a tail wind that pushed us on the back straight and finding the right braking distance wasn’t easy.“

Jake Dennis: “The new car’s fantastic! It’s got more downforce thanks to the new sidepods and the rear diffuser. It’s already easier and more pleasant to drive than the previous model. Renault Sport Technologies have made a big step forward. The car will be quicker and we’ll find that out as the preparations for the season continue.“

New uncertainly for the European Championship in Zuera ?

Message from the President of the Spanish Automobile Federation