Charles Fiault (Sodi / Maxter) made the best start in the final, Maxime Roy (Tony Kart / TM) followed closely, Christophe Benoit (Birel / TM) wasnt intimidated by Nolan Mantione (Birel / TM) and ensured his third place ahead of James Glenister (Kosmic / TM). The top 3 were the fastest, Mantione was back to fourth from Amos Mechoulam (DR / Vortex). Fiault remained the race leader. Had Roy made his calculations and knew this would give him the title? It was quite possible. 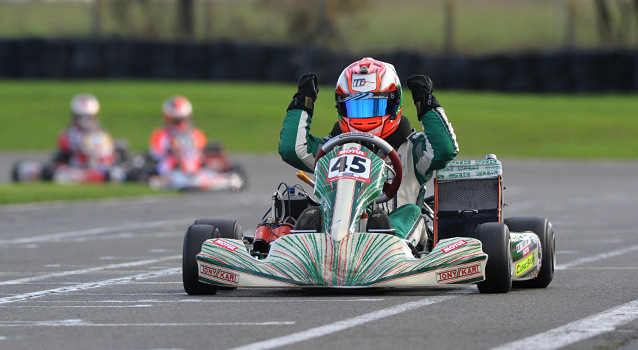 Actually, no, Roy grabbed the lead on lap 10 after the fastest lap. Mantione went off the track in right after the start, apparently with tires worn to the limit. Roy escaped irretrievably to win the title after successive fastest laps. Benoit didnt abandon his hopes of taking second position from Fiault, but he could not pass.

Indisputable victory went to Maxime Roy, synonymous with the national title in KZ2, and ahead of Charles Fiault and Christophe Benoit. The podium was also the final ranking of the French Championship.