An hour more sleep, great weather in the morning, the last day of the GPO had good start at Laval, even if temperatures remained cool, at around 6 ° during the first laps of the morning, those for KZ2. Charles Fiault (Sodi / Maxter) had a celebration, improving the fastest lap to finish with 48” 790, almost a second faster than James Glenister (Kosmic / TM), who beat Nolan Mantione (Birel / TM) and Christophe Benoit (Birel / TM) fighting for third place in the championship. 6th was Maxime Roy (Tony Kart / TM) did not seem to have really tried in qualifying.

In KF3, there were constantly changing positions at the top, especially between Jules Bollier (Kosmic / Parilla) and Arthur Lehouck (Sodi / Parilla) with Callum Ilott (Zanardi / Parilla) in ambush. Gabriel Aubry (Birel / TM) went on the attack in the final meters and took third ahead of Bollier, Amaury Bonduel (ART GP / Parilla) and Julien Darras (Tony Kart / Parilla) in sixth, while Ilott took pole with 49 ” 139, 2 tenths faster than Lehouck. 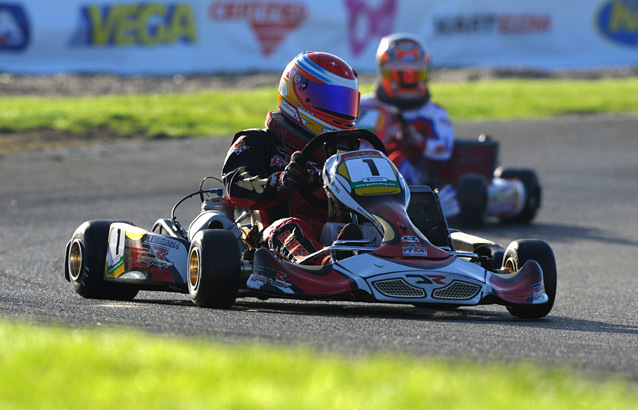