The weather cooled considerably for the GPO at Laval, the last event of the season for the French Championship titles. The rain disrupted Saturday morning.

Pole in KF3 was secured in qualifying by Julien Darras (Tony Kart / Parilla) from Paolo Besancenez (Sodi / Parilla) and Callum Ilott (Zanardi / Parilla). When starting in the confused Prefinal, many favorites remained on the sidelines, while Gabriel Aubry took the opportunity to make up lost time and win the race against François Becamel (Kosmic / Parilla) and Matteo Raspatelli (Tony Kart / Parilla). Things were better at the start of the final, even though a collision at the hairpin disrupted the back of the pack. After Aubry and Raspatelli held the lead until the halfway point, then Jules Bollier (Kosmic / Parilla) took control and never let them go until the finish. Becamel and Raspatelli finished in the same order as in the prefinal and completed the podium. 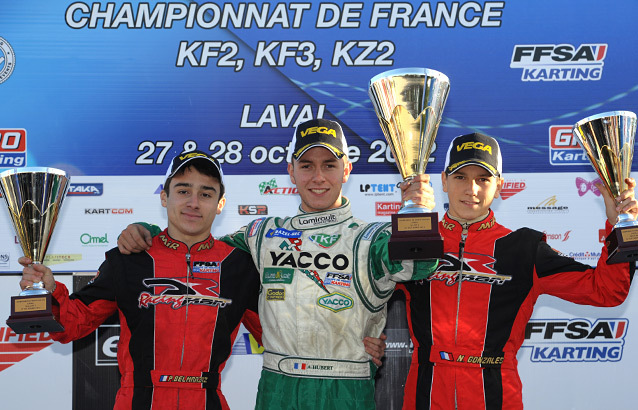 Qualifying in KF2 was interrupted by a substantial downpour while the drivers were on slicks. In these conditions, Thierry Fievez (Tony Kart / Vortex) took his first pole in this category, ahead of Morgan Riche (FA Kart / Vortex), Pascal Belmaaziz (DR / Vortex) and Valentin Moineault (Tony Kart / Vortex). Belmaaziz cleverly won the prefinal despite a big comeback from teammate Nicolas Gonzales, second to Boutonnet. There were several leaders in the final starting with Gonzales, then Boutonnet, and finally Belmaaziz and Hubert, winner despite pressure from Belmaaziz who kept up the pressure until the end. Gonzales got the better of Boutonnet for the 3rd step of the podium, Sébastien Bailly (Swiss Hutless / TM) finished 5th.

There were few KZ2s but nonetheless there was a fight for victory, Charles Fiault (Sodi / Maxter), Maxime Roy (Tony Kart / Parilla) and Christophe Benoit (Birel / TM) pulled out their best in the game. Fiault was on pole position in qualifying before winning the prefinal. But Maxime Roy (Tony Kart / TM) gradually resumed the lead to win in the final after a penalty for Nolan Mantione (Birel / TM), who was very fast, but jumped the start. Benoit, second in qualifying, took 3rd twice with a lot of action.