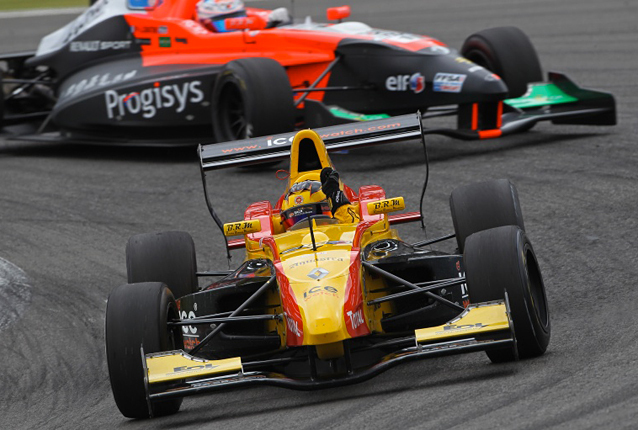 Even if there were a few drops of rain when the Group B drivers in the Formula Renault 2.0 Eurocup went out, qualifying took place on a mainly dry track.

Stoffel Vandoorne, winner of the first race, set the tempo in the session, but the Belgian had to cope with the attacks of Miki Weckström and Oscar Tunjo. He fell behind briefly and then fought back with a lap in 1m 56.898s to go back to the top of the time sheets. He went even quicker next time round and beat the track record in 1m 56.465s to grab pole. Second and third were Pierre Gasly and Mikko Pakari.

The Group A drivers knew they would have to beat the circuit record to take pole. As it was raining more heavily they didn’t have an easy job.

Daniil Kvyat and Oliver Rowland tried to get near Vandoorne’s time but were hindered by the rain. The Russian set the quickest time in the group in 1m 57.414s from Rowland and Nyck de Vries. Frenchman Norman Nato could do no better than sixth, a disappointing performance.

Stoffel Vandoorne: “The track had a lot of grip this morning and my car was very quick as reflected in my times. The gaps are smaller compared to yesterday as the others fought back. I’m on pole for the second time this weekend, but the most important thing is to be in front of Norman Nato and Daniil Kvyat, my most dangerous rivals to whom I must close the gap in the points’ table.”