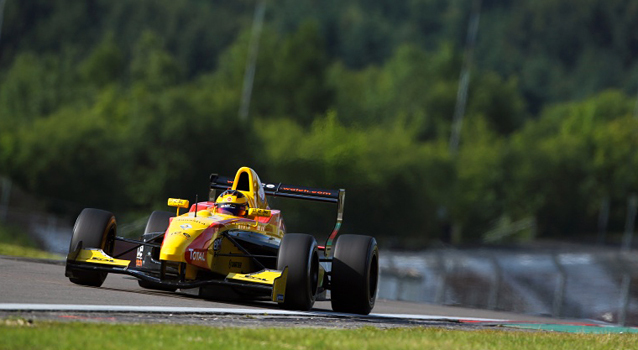 Stoffel Vandoorne (Josef Kaufmann Racing) added to his season tally of two third places and one second-place finish by claiming his very first victory in the Eurocup Formula Renault 2.0. Vandoorne drove the perfect race at the Nürburgring, having earlier secured his maiden pole position in the discipline. The RACB National Team driver was joined on the podium by Norman Nato (RC Formula) and Paul-Loup Chatin (Tech 1 Racing), and the victory sees him gain ground on overall championship leader Daniil Kvyat (Koiranen Motorsport), who could only manage fifth.

Stoffel Vandoorne put in a strong performance in qualifying to claim the first pole position of his Eurocup Formula Renault 2.0 career. The Belgian lined up on the front row of the grid alongside Norman Nato, with Paul-Loup Chatin and Nyck de Vries (R-Ace GP) behind them on the second row. The drivers got away cleanly at the start, and the front four held their order as they approached the first turn.

Oliver Rowland (Fortec Motorsport) and Oscar Tunjo (Tech 1 Racing), seventh and eighth respectively at the end of the first lap, lit up the early stages of the race, while out in front, Vandoorne, Nato, Chatin and de Vries began to pull away. In the chasing pack, Matthieu Vaxivière (Tech 1 Racing) was forced to retire after colliding with William Vermont (Arta Engineering). Stefan Wackerbauer (Koiranen Motorsport) and Pieter Schothorst (Josef Kaufmann Racing) were the other drivers to capitulate in the early part of the race.

At the midpoint of the race, Vandoorne and Nato picked up the pace and began to stretch their lead. Behind them, the situation was altogether more animated, with Tunjo and Riberas doing well to move up into seventh and eighth respectively. Rowland, meanwhile, slipped down into ninth place and was left to fend off the challenge of Fortec Motorsports team-mate and fellow Racing Steps Foundation driver Jake Dennis.

With the order at the front seemingly set in stone, Kvyat threw caution to the wind in the closing laps as he pushed for fifth place. In the penultimate lap, the Russian found the opening and successfully passed Guilherme Silva. Tunjo also tried his luck, but Silva held firm to stay in sixth. In the final lap, however, the Brazilian went off the track and fell towards the back of the field.

It was Vandoorne who eventually took the chequered flag, having led from start to finish. The victory, his first in the Eurocup Formula Renault 2.0, takes him to within 12 points of overall championship leader Daniil Kvyat, who finished fifth. Norman Nato and Paul-Loup Chatin completed the podium.

Stoffel Vandoorne: “I had a very good weekend last week in the FR 2.0 NEC on this very same track, with two poles and two victories. So I came here full of confidence. It’s important to have finally taken this maiden victory and pulled back some points on Daniil Kvyat. It’s the perfect outcome for me today.”

Norman Nato: “Having retired from the second race at Spa-Francorchamps, it was vitally important for me to bounce back today and get a podium finish at the very least. It’s a job well done and tomorrow I’ll try to do even better.“

Paul-Loup Chatin: “It’s all going well in the Formula Renault 2.0 Alps, but things are a bit more difficult in the Eurocup Formula Renault 2.0. We’re improving with every race and this podium finish is a nice reward, as it’s my first of the season. It’s an encouraging sign for things to come.“