Eurocup FR 2.0 – Nürburgring: Nato top in the dry, Rowland shines in the wet 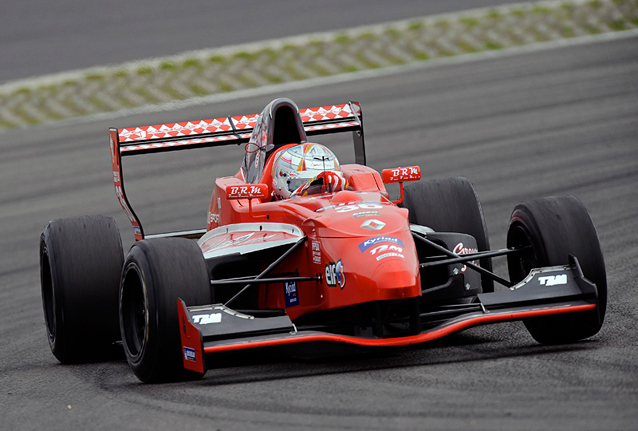 The Eurocup Formula Renault 2.0 drivers had tricky conditions to contend with in collective testing at the Nürburgring as the third round of the season got underway. Norman Nato (RC Formula), in great form at present, secured the best performance of the day on a dry track at the end of the morning session. In the afternoon, Oliver Rowland (Fortec Motorsports) took his turn to shine in the rain.

Thirty-eight cars will line up on the grid for the Eurocup Formula Renault 2.0 at the Nürburgring. As was the case at Spa-Francorchamps, Jake Dennis (Forted Motorsports), a podium finisher in Belgium, and Steijn Schothorst (Manor MP Motorsport) have once again been given wild-card entries. Felipe Fraga (Tech 1 Racing), Gabriel Casagrande (Mark Burdett Motorsport) and Tanart Sathienthirakul (Manor MP Motorsport), for their part, are all making their debuts in the competition this weekend.

The first collective testing session got underway on a damp track, so it took a few minutes for the first significant times to be recorded. Stoffel Vandoorne (Josef Kaufmann Racing), who won both races in the Formula Renault 2.0 NEC on this very track last weekend, and Daniil Kvyat, Eurocup Formula Renault 2.0 leader, exchanged first place several times during the session. However, Norman Nato seized control at the end of the session by improving on the benchmark time lap after lap. The order changed completely in the dying seconds and the Frenchman finished the morning top of the timesheets with a lap of 1:58.120, ahead of Jordan King (Manor MP Motorsport) and Alex Riberas (Josef Kaufmann Racing).

The afternoon session was a rainy affair, with a succession of red flags in the opening minutes. The second part of the session proved more straightforward and the drivers were able to string laps together, even with the less than perfect grip on the track. Oliver Rowland handled the conditions best and finished fastest with a time of 2:16.429. Patrick Kujala (Koiranen Motorsport) also impressed in the rain by climbing to second place, while Jordan King, third, continued his positive form from the morning session.

Norman Nato: “Everything went well this morning and we were quick in the dry conditions, but I had a bad afternoon session as I was hit by another driver right at the start. It’s disappointing because it meant we weren’t able to work in the rain, and the car is quite damaged. So tomorrow I’ll go into qualifying with fewer points of reference than the other drivers, particularly if it rains. Between now and then, my mechanics will have a lot of work on their hands.”

Patrick Kujala: “It’s my first time driving here. After ten minutes of getting to know the track this morning, I managed to find my bearings. The car wasn’t perfect but, in the rain in the second session, things were good. I was comfortable and I felt really good.”

Alex Riberas: “I felt good in the first session. I knew I needed to attack very early on, with the risk of rain, in order to get the measure of the car before Saturday. I’ve been very busy recently as I had to sit my Baccalaureate exams, which I passed. I’m now relaxed with it all and completely focused on my driving. I hope that will show on the track.”