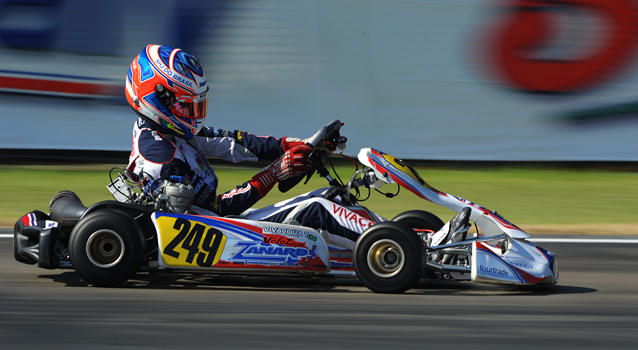 Thiago Vivacqua was not disoriented by the heat hovering over La Conca last weekend, during the third WSK Euro Series round: indeed, high temperatures reminded him of his home country, Brazil. High grip and rubber deposits on the track did not trouble him either, thanks to his experience from last season. The Chiesa Corse driver showed some good performances during the qualifying heats despite his disappointing times due to a mechanical trouble. He was moving up the provisional standings and thought he could qualify decently when an engine trouble, and then a bad adjustment choice penalised him.

«I was satisfied with my performances during the heats», Thiago explained, «this is why I am disappointed at not having being able to get to the final due to a technical problem. I think it was a positive meeting for me from a performance viewpoint. I will soon perform some tests at Braga before the last round of the U18 World Championship in early July. I do not know either the Portuguese track or the kart, but I had the opportunity to get to know this single-type formula at the Academy Trophy at Sarno, in 2011, where I finished 5th. With the right set-up, it is certainly possible to achieve some good results at this meeting, I am confident about that!».

Vivacqua and ART GP on the Same Wavelength

KF2 Season Ends on a High Note for Vivacqua