Russell streets ahead in pre-B 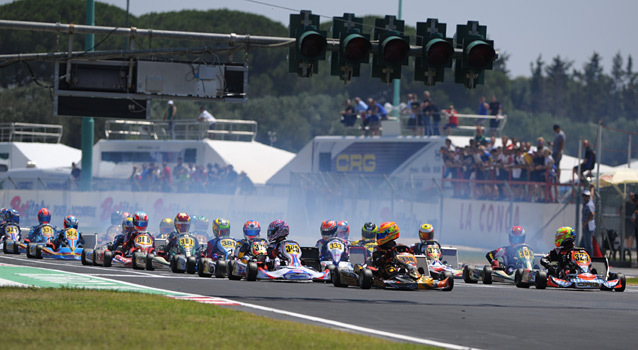 George Russell (Intrepid/Vortex) escaped immediately ahead of the KF3 Prefinal B ahead of Dan Ticktum (Zanardi/Parilla), Alex Palou (CRG/BMB), Marcu Dionisos (Top Kart/Parilla), Connor Jupp (LH/BMB) and Nikita Sitnikov (Tony/BMB). A big crash at the first corner disturbed the back half of the pack. Gabi Aubry (Birel/TM) took advantage skillfully to reach 16th position, but had to retire shortly thereafter. Russell led by over 3” from Palou in second from Ticktum, Sitnikov, Jupp and Marcu. Nikita Mazepin (ZanardiParilla) was fastest in 11th place.

Sitnikov attacked Ticktum attack shortly after the halfway point and moved into third position then closed on Palou. Although a very long way ahead, Russell set several fastest laps in a row, just to show off. He was regularly 3/10 faster than his opponents. Sitnikov attacked Palou in the final corner but the Spaniard was not impressed. Russell won the race ahead of Palou, Sitnikov, Ticktum, Jupp and Marcu.