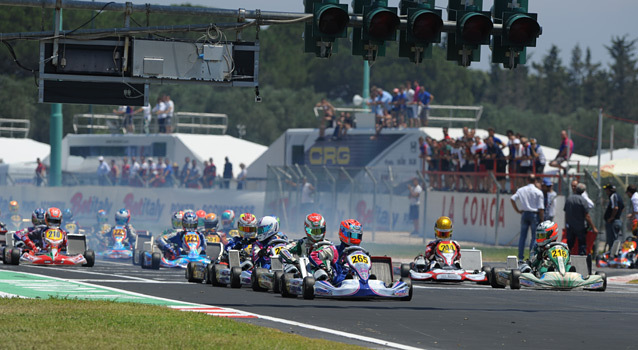 It was still nice and hot in La Conca for the start of the KF2 Prefinal with Antonio Fuoco (Kosmic / Vortex) and Damiano Fioravanti (Tony Kart / Vortex) on the front row. Fuoco got away without incident ahead of Flavio Camponeschi (Tony Kart / Vortex), Niclas Nielsen (Kosmic / Vortex), Karol Dabski (Praga / Parilla), Pedro Hiltbrand (FA Kart / Vortex) and Charles Leclerc (ART GP / Parilla). Max Verstappen (Intrepid / TM) was already eighth, but Felice Tiene (CRG / BMB) was experiencing a technical problem and was dead last. Leclerc dropped 4 places on the second lap and was positioned just behind Verstappen.

Hiltbrand passed Dabski for 4th place. Nielsen retired on on the sixth lap. There was a big fight over 4th place: Leclerc attacked Verstappen and Dabski and passed both. The Monaco driver was in 5th position behind Fioravanti.

Sam Snell (Energy / Parilla) took seventh ahead of Dabski, with Dennis Olsen (Energy / TM) also going well. Tom Joyner (LH / BMB) moved into the top 10 followed by Karol Basz (Birel / BMB). Fuoco had more than one and a half seconds ahead of Camponeschi who was ahead of Hiltbrand by nearly a second. Leclerc hurried to close on Fioravanti and pass at the last corner. Olsen took over the 6th position from his teammate Snell, Barnicoat finished 14th. Verstappen was missing from the lead group, in 27th.